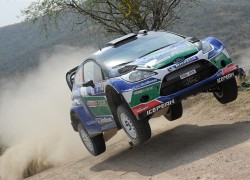 The fourth round of the 2012 FIA World Rally Championships has brought the best rally drivers in the world to the “Vodafone Rally de Portugal” from Wednesday, March 28, until Sunday, April 1.

The Vodafone Rally de Portugal 2012 is the fourth event of the World Rally Championship (WRC) calendar for 2012. The 13 leg championship opened in January with the Monte Carlo Rally and closes in November in Spain.

The Citroën Total World Rally Team, a three-time Vodafone Rally de Portugal champion, will be competing for a fourth victory with Mexico’s  Sébastien Loeb and Portuguese Daniel Elena being the favorite racers at the event.

The 1000km race will start from Lisbon at lunchtime on Thursday. Day one will include a street stage in the Portuguese capital, followed by three timed stages on gravel run in the evening.

The rest of the weekend includes three legs running through the southern region of the country to end at Estádio Algarve, in Loulé.

Motor sports have been an important sport in Portugal since 1903 when Automóvel Club de Portugal was founded.

The Rally de Portugal began in 1975, succeeding the Rally TAP, both of which were founded and have been organised by the Automóvel Club de Portugal – the Portuguese equivalent of the AAA (American Automotive Association).

The event later became known as the “Vodafone Rally de Portugal.”  Throughout its history some of the most renowned names in international car racing have participated in the competition.