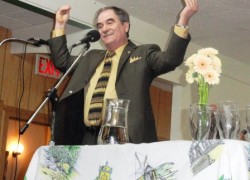 The Ferreira-Mendes Portuguese-American Archives at University of Massachusetts Dartmouth announces an evening of traditional cantorias with singers José Plácido and António Resendes accompanied by musicians Tony and Abel Lina.

The event will take place on Friday, November 18, 6:00 – 7:30 P.M. in the Prince Henry Society Reading Room at the Ferreira-Mendes Portuguese-American Archives, parking lot 13. Light refreshments will be served. Admission is free.

Cantorias, also known as cantigas ao desafio and desgarradas, consist of a type of poetic duel where two singers challenge each other in an improvised, rhymed, dialogue accompanied by musical instruments. The objective is not so much to defeat the opponent as to be recognized for one’s wit, creativity, rhyming ability, double entendres, and overall verbal and mental acuity.

According to some folklorists, this type of performance goes back to the troubadours and jokester of the middle ages, while other researchers place its roots in the improvisational, musical traditions of Arabic, Mediterranean cultures. In rural Portugal, cantorias would occur more or less spontaneously during celebratory gatherings such as harvest celebrations and village feasts. The tradition was particularly strong in the Azores, from where it travelled to the U.S. and Canada.

Often overlooked as a rural and unrefined art form, cantorias have, of late, attracted the attention of scholars and sophisticated audiences. In the U.S., José Brites, a Portuguese-American author and publisher, has led the efforts to revive this Azorean cultural tradition through the organization of various performances and promtions.

The entrance to the Ferreira-Mendes Portuguese-American Archives is located on the campus side of the Claire T. Carney Library. For access during library construction as you approach from Lot 13, enter the library basement and proceed to the first floor, exit the building, and proceed to the right to the Archives entrance.