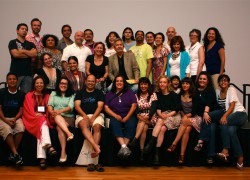 The poets Ire’ne Lara Silva and Millicent Borges Accardi met last summer at CantoMundo in Austin, Texas, at a wonderful gathering of Latino(a) poets where writers are nurtured.

In their conversation, they spoke about grief, poetry completion scams, the notion of “community,” documenting “moments” and Fernando Pessoa as they trade off questions and answers in a multi-faceted literary dialogue.

There were readings and lectures and discussions about poetics which are overlooked by mainstream publishers and critics. CantoMundo fellows network with peer poets to enrich Latina(o) poetry.

After the CantoMundo, Ire’ne Lara Silva and Millicent Borges Accardi continued their conversation over many weeks via email interactions that included discussions of poetry, “day jobs” and work by others, politics, and the angst of applying for literary competitions and awards.

They also exchanged books: Millicent’s chapbook, Woman on a Shaky Bridge and her full-length collection Injuring Eternity and Ire’ne Lara Silva’s ani’mal and fur ia. The edited result of the conversation between these two writers is presented in the latest Boxcar Poetry Review (online). (Eduardo C. Corral is the interview editor and also a CantoMundo fellow).

CantoMundo seeks to create a space where Latina/o poets through workshops specifically devoted to the craft of poetry, every aspect of the work, including discussions around aesthetic issues, will be firmly rooted in social concerns.

CantoMundo will convene in 2012, from July 12 to July 15 for a three day retreat in Austin, Texas.