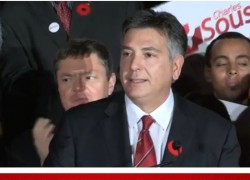 Portuguese-Canadian, Charles Sousa, 54, is a Liberal Party leadership candidate for the post of Primier of Ontario, Canada.

Sousa is the former Citizen and Immigration Minister and, since 2007,  has been the MPP for Mississauga South. He also served as Minister of Labour from 2010 to 2011, after having been Parliamentary Assistant to the Minister of Economic Development and Trade.

Until recently, before his resignation to run for the post, Sousa was responsible for the 2015 Pan and Para Pan American Games in the Cabinet of Premier Dalton McGuinty.

Sousa believes that that his 25-year career in finance makes him uniquely qualified to lead the province through the current economic crises. If he becomes Primer, Sousa has pledge to create more jobs for the province’s struggling auto and northern mining industries.