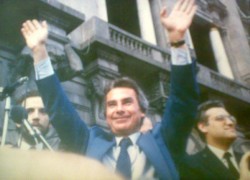 The move follows the purported “confession” of Francisco Farinha Simões, a man jailed for kidnapping, who claims he organized the plane’s bombing on behalf of the US Central Intelligence Agency.

In comments to Lusa, MP Castro said the allegations, posted on the Internet last month, raised “aspects that were never investigated,” justifying a new parliamentary inquiry, the 10th since the controversial accident that killed Sá Carneiro, with seven others, during the heated presidential election season of 1981.

Claiming to have been a CIA operative until 1989, Simões has alleged that he received orders from then US Ambassador Frank Carlucci, later appointed CIA director, to place a bomb aboard the small plane, in which Defense Minister Adelino Amaro da Costa also died.

Simões, who is serving a 6-1/2-year sentence for kidnapping a prominent TV journalist, has claimed the operation, which he said he organized, cost the CIA $750,000 to a $1 million.

In his 18-page “confession” posted online, Simões, who has also served time for drug trafficking, said he had decided to speak out of “conscience” and because the statute of limitations protects him from standing trial.

In 1995, Simões was called to testify before parliamentary commission inquiring into the case. No convincing evidence of sabotage has ever surfaced on the accident that killed Francisco Sá Carneiro, but suspicion of foul play has never been fully put to rest.