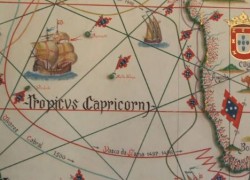 The Portuguese Literary & Cultural Studies, edited by Christopher Larkosh, Mario Pereira and Memory Holloway, is a peer-reviewed journal published by Tagus Press in the Center for Portuguese Studies and Culture at the University of Massachusetts Dartmouth (USA).

With issues already dedicated to the literatures, cultures and other expressive traditions of Angola, Mozambique and Cape Verde, this upcoming issue allows us to revisit cultural production in general and visual, material and sonic culture in particular in these three countries and in São Tomé and Príncipe and Guinea-Bissau, as well as local areas, cross-border regions, political systems and historical periods that do not belong to neat categories and spaces where Portuguese enjoys official status. Although the Portuguese language, as well as literature and political discourse in Portuguese, continues to shape discussions on cultural identity within Lusophone Africa, visual, material and sonic culture questions the primacy of language and literature and provides alternative models for national identities and the division of space within the linguistic frameworks predicated by institutions such as the CPLP or Lusofonia. Moreover, the transnational circulation of art and artists, music and musicians, cinema and video, etc., encourages a more flexible and nuanced approach to (trans-) national identity. The study of visual, material and sonic cultural production complicates current understandings of Lusophone Africa that are based on colonial and post-independence national borders.

Themes to be addressed in this issue may include culture, language, identity, race, gender, citizenship, politics, postcolonial relations, technology and the arts, among other topics.

The deadline for submission is May 31, 2017.  Submit articles in English or Portuguese. Submissions must conform to the journal’s guidelines.  More details here.