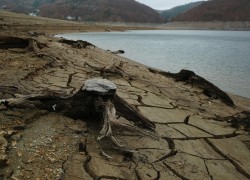 With no significant rainfall in February, the situation of extreme drought across mainland Portugal is now severe, the worst in the last 80 years.

Speaking to reporters after a meeting with the prime minister, João Machado said he had underlined the need for quick action to release European Union aid funds.

According to Rui Rodrigues of the National Hydro Resource Information System, most of the country is now afflicted by drought with levels of dam stored water remaining in line or below previous years.

“The majority of storage facilities in the north of the country are below average, even while this position has been registered in four of the last ten years,” Rodrigues said.

“Based on significant scale dams, mainland Portugal has around 11 km3 of water storage capacity of which some 70% are filled,” he added.

Rodrigues had stated recently that a rainy February was needed to reverse the situation. If the weather were the same in February, as it had been in January, the country would be officially under extreme drought.

For meteorologist Manuel Costa Alves, it is extremely important that the next few months bring rain, but he said that “once winter rainfall is lost, the rainfall from spring is never enough to reverse the situation.”

Highlighting the fact that October was extremely warm, the meteorologist said that December “normally contributes with a large amount of precipitation across the country,” but this year it has been virtually zero.

“Data for the end of December showed 83 % of the territory suffering weak drought, 6 % with moderate drought, 8% as normal and 3% as humid,” he said.

The meteorologist also said that a drought situation is an “inherent risk” of mainland Portugal’s climate, adding that the last major drought occurred in 2004/2005.

“The 2004/2005 drought was the most intense since 1941. It must be brought to attention because it was very intense and caused damages and loss to many activities,” he said.

The lack of rain in the southern region of Algarve, one of the most drought affect areas, is producing smaller oranges, which are refused by the market. This is causing a strong drop in turnover for farmers and could lead to bankruptcy, a sector representative said.