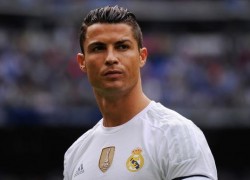 Portuguese international footballer Cristiano Ronaldo won his fourth Ballon d’Or award presented by the prestigious France Football  magazine to the soccer player with the best performance of the year. The announcement took place  in Paris, France, on Monday, December 12.

Ronaldo had received the honor in 2014, 2013, and 2008. He was picked from a list of 30 players by a group of 173 international journalists selected by the French magazine. He received the honor a month after his contract with Madrid was extended until 2021, keeping him in Spain until he is 36 years old.

Ronaldo, who was away in Japan at the time of the award announcement, participating in the World Club Championships, said in a recorded video statement:

“For me it’s a great honor to receive my fourth golden ball. I never thought in my mind to win four times, so I’m so pleased, I’m so happy. I have to thank all my teammates, the national team, Real Madrid, all the people, all the players who helped me win this individual award.” 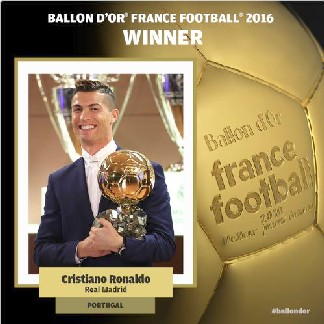 This is his fourth world player of the year award. He won the European Super Cup with Madrid, as well as UEFA’s award as the best player in Europe last season (a prize he had won in 2014), and  ‘Best Portuguese Player’ of the century by the Portuguese Football Federation (FPF).  He is also in contention for FIFA’s prize this year, along with Lionel Messi and Antoine Griezmann.

Ronaldo was the captain of winner Portugal’s team at 2016 European Championship in France and helped Real Madrid to a record-extending Champions League crown in 2016.

Recently he said that he was going through the best period of his life. Indeed, he scored a record 11 goals in the group stage of the European competition last season and finished with a total of 16, one short of the record he himself set in 2014. He is the tournament’s career leading scorer with 95 goals, and is two away from becoming the first player to score 100 goals in European club competitions.

Cristiano Ronaldo, 31, a native of Madeira island, is a Portuguese professional footballer who plays as forward for Spanish La Liga Club Real Madrid. The captain of the Portuguese national team, he has become the most expensive player in football history. In 2014, 2015 and 2016 Forbes magazine ranked him the world’s highest paid athlete, with yearly earnings of over $80 million in combined income from salaries, bonuses and off-field earnings.