C7: Cristiano Ronaldo stylish hairdos are not so vain – Updated 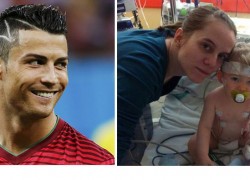 The novelty of Cristiano Ronaldo exhibiting a zig-zag design shaved on the right side of his head was interpreted by many as a vain fashion statement, since Cristiano revealed his new haircut last Sunday during the World Cup match between Portugal and the United States.

Yet, as  many in the the international press have speculated; far from being vain, reportedly the new look was a symbolic tribute to a young boy named Erik Ortiz Cruz, from Villaluenga de la Sagra, who recently underwent a brain surgery procedure  paid for by the Portuguese soccer star.

After much speculation, the relationship between Cristiano’s new haircut and his generosity has since been cleared and are not related. What has been established is Cristiano’s generosity as confirmed by Cristina Cruz, the boy’s mother. Erick’s surgery, which took place last March to correct a condition called cortical dysplasia, cost over $83,000 and was paid by Cristiano Ronaldo.

For those who know Cristiano well, his gesture shouldn’t have come as a surprise. Born in poverty, at the age of 15, Cristiano himself was diagnosed with a heart condition for which he underwent surgery and, long before he became a celebrity, he has been known for a his warm heart and his charity work. Quietly, he has been big on helping children in need and reportedly has  paid for another child’s cancer treatment in 2012.

Cristiano Ronaldo, 29, was born on Madeira island to Maria Dolores dos Santos Aveiro and José Dinis Aveiro.  His second name “Ronaldo” was given after US President Ronald Reagan, his father’s favorite actor. Currently he plays as a winger or striker for Spanish La Liga club Real Madrid and is the captain of the Portuguese national team.

Ronaldo became the most expensive player in football history after moving from Manchester United to Real Madrid in a transfer deal worth US$132m with earnings of about $23.5 million a year. Forbes recently ranked him the highest paid player in the world. With sponsorships, his estimated earnings are at about $73 million.

He has won many awards and distinctions including the prestigious 2013 Ballon d’Or award after being voted “World’s Player of the Year” by the FIFA. He is the third Portuguese international footballer to win the Ballon d’Or after Eusébio (1965) and Luís Figo (2000), and the first Portuguese player to win the FIFA’s award twice.