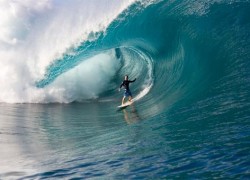 The best surf spots in the Azores are found off the island of São Miguel, where its north coast provides powerful and uncrowned surf.

The surf generally ranges in size from 3-5 feet during summer, reaching up to 15 feet in the winter months.

Under the influence of the Gulf Stream, the climate of the Azores is temperate, with a high rainfall and a narrow temperature range: an annual temperature of 14º, with an average summer temperature of 24º, when the sea temperature is 22º.

The Billabong Azores Islands Pro, presented by Nissan, was organized by DAAZ Eventos and USBA (Azores Surfers and Bodyboarders Union).