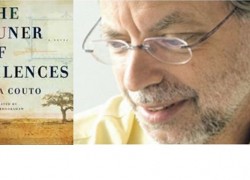 Best-selling author, Mia Couto, will be in New York City, May 4, at 7 p.m, for the launching of The Tuner of Silences (2013), his most recent book to appear in English. The evening will feature a reading and signing by the author as well as an on-stage interview with journalist Anderson Tepper.

From Mozambique, Couto, 58, who writes in Portuguese, is the first African author to receive the Latin, Union Award of Romance Languages. He is the best-selling author of 25 books and has been translated into 20 languages.

Two of Couto’s novels have been made into feature films and his books have been bestsellers in Africa, Europe and South America. In 2002, a committee of African literary critics named his novel Sleepwalking Land one of the twelve best African books of the twentieth century. His novels have been awarded major literary prizes in Mozambique, Portugal, Brazil and Italy.

Anderson Tepper is on the staff of Vanity Fair and has written on books and authors for a variety of publications, including the New York Times Book Review, Tin House, Words without Borders, and Paris Review Daily. He is also on advisory committees for both the Brooklyn Book Festival’s international stage and PEN World Voices, where he has moderated conversations with authors such as Nuruddin Farah, Ben Okri, Petina Gappah, and José Eduardo Agualusa.

The Tuner of Silences, published in North America by Biblioasis, has been acclaimed in more than half a dozen countries. The book tells the story of Mwanito’s struggle to reconstruct a family history that his father is unable to discuss. With the young woman’s arrival in Jezoosalem, however, the silence of the past quickly breaks down, and both his father’s story and the world are heard once more.

The event is taking place at the powerHouse Arena, 37 Main Street, Brooklyn. Admission is free and open to the public. For further information contact Tara Murphy at tmurphy@biblioasis.com or at 519/968-2206.