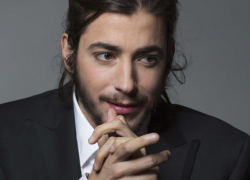 Portuguese vocalist Salvador Sobral, 27, won the 2017 Eurovision Song Contest, with the song ‘Amar Pelos Dois’ [Loving for both], giving Portugal its first ever victory at the popular 53 years old competition.

The event was broadcast live from the International Exhibition Centre in Ukraine’s capital of Kiev to millions of views. The contest was decided by popular tele-vote (50%) and by a jury (50%). Portugal was followed by Bulgaria’s Kristian Kostov while Moldova came third.

Salvador Sobral, who had competed in the semi-final on the night of Tuesday 11, was the favorite of 10 qualifiers chosen from 18 entries.

Portugal entered the contest a total of 48 times since their first appearance in 1964, represented by Antonio Calvario with Oração. In 1966, Portugal placed highest in sixth place, represented by Lucia Moniz.

Since the introduction of the semi-finals Portugal has failed to progress to the final eight times. After failing to qualify in 2015, Portugal withdrew from the 2016 competition. The Portuguese were the longest running contestants never to have won the competition.

Salvador Sobral was born in Lisbon on December 28, 1980. The music and lyrics were composed by him and his sister Luísa Sobral.

The final tally for Eurovision 2017