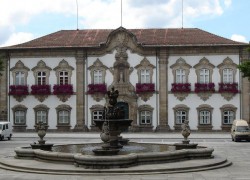 The city of Braga, the third largest Portuguese city, is the 2012 European Youth Capital, a title awarded to a European city for the period of one year to showcase its youth-related cultural, social, political and economic life and development.

Braga (population of 826,833) provides unique youth field services and facilities for the youth, such as the Portuguese Youth Institute, the Federation of Youth Associations, the City Council for Youth and, most notably, the National Agency of Youth.

The European Youth Capital is a project of the European Youth Forum which main objective is promoting intra-European co-operation between young people and to raise awareness of the contributions young people can bring to the community, through civic participation in the cultural, economic and political life of a city.

Braga is the oldest Portuguese city and one of the oldest Christian cities in the World. Yet, in terms of population, Braga is also one of the youngest cities in Europe.