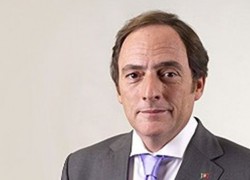 Portuguese Foreign Minister Paulo Portas will visit Boston from June 4 to June 5 to preside as  guest of honor at the 28th Heritage Day of Portugal celebration to be held at the Massachusetts House of Representatives on June 5.

The Ambassador of Portugal in Washington, Nuno Brito, and the Consul General Portugal in Boston, Paulo Cunha Alves, will also attend the event. The Heritage Day of Portugal gala is part of the 7th  Boston Portuguese Festival  calendar underway.

After the ceremony, the Portuguese Foreign Minister and his guests will be hosted by f Governor Deval Patrick at reception in their honor to be held at the Grey Hall at noon time.

In the evening at the MIT, the Portuguese Foreign Minister will deliver a lecture, scheduled for 4pm, to be held at the Grier Room (401), Building 34, entitled “The Portuguese Perspective of Today’s Europe.”  Portuguese-American scholar Ernest Moniz, Cecil & Ida Green Distinguished Professor of Physics, will introduce the guest speaker.

Paulo Portas , 50, a conservative Portuguese career politician, is the leader of CDS-PP, a Christian Democratic oriented party. A member of the Portuguese Parliament since 1995, he was Minister of Defense from 2002 to 2005. In 2001, Portas became both Minister of Foreign Affairs and Minister of State in a government coalition of his party and the center right oriented PSD party lead by incumbent Prime Minister Pedro Passos Coelho.

The Day of Portugal is a national annual holiday celebrated by the Portuguese on June 10. The date also honors the life of Luís de Camões, Portugal’s national poet who died on the 10th of June 1580. Camões wrote “Os Lusiadas,” Portugal’s national epic poem celebrating the 16th century national history and achievements. For the Portuguese people living abroad, the Day of Portugal is also the time to showcase their heritage and ethnic pride.