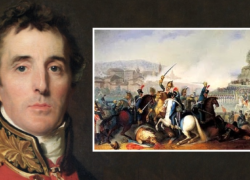 In October 1810, the Third French invasion of Portugal under Maréchal Masséna arrived at the Lines of Torres Vedras and his triumphal march into Lisbon came to an abrupt halt. Five months later a thoroughly demoralized and defeated French army retreated from Portugal and never returned.

The Lines played a vital role in enabling the allied army to operate against a more numerous enemy. When threatened, there was a safe place for the allies to retire to, and from this secure base, Wellington eventually liberated the Iberian Peninsula.

France, Portugal and Britain developed plans for the defense of Lisbon in 1808 and 1809. In November 1809, the British proposal was commenced and became the Lines of Torres Vedras. The Memorandum on the construction was written in October 1809 but was more of an outline. The design and construction were completed over the next 18 months, the bulk being completed before the arrival of the French in October 1810. The initial design was expanded through 1810 as more time became available and the construction in October 1810 was significantly different to the original memorandum.

The book takes the reader through events in 1809 that led to the need for the construction of defenses. The construction work is detailed and illustrated through several maps to explain the position and purpose of the several defenses. The French invasion of 1810 is summarized through to the time when the French arrived at the Lines. The operations and movements over the next month are again detailed along with the continuing construction work on the Lines.

One of the unusual elements of the defenses was the construction of a telegraph system and this is described in great detail.

One of the lesser-known facts about the Lines, is the position of the opposing forces between October 1810 and March 1811. They were only facing each other at the Lines for a few weeks during this period and most French troops never approached them. The operations and defenses were spread over a much larger area.

This book uses many new sources to prove a new, in-depth, English language account of the massive engineering exercise that built the Lines with the help of thousands of Portuguese civilians. Without the construction of the Lines, it is likely that Portugal would have been lost and history would tell a very different story.

Dr Mark S. Thompson has had a lifelong interest in the British army in the Peninsular War. He has made a special study of the campaigns of Marshal Beresford and the Battle of Albuera, and he has published a number of books on Peninsular subjects. Recently he completed a PhD on the role of the Royal Engineers in the Peninsula. He is a member of the British Commission for Military History, the Friends of the Lines of Torres Vedras and the Friends of the British Military Cemetery at Elvas. He is currently working on the diary of Edmund Mulcaster 1809-10.