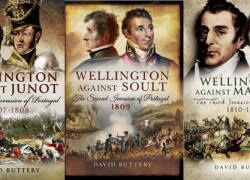 At the heart of David Buttery’s third book on the Peninsular War lies the comparison between two great commanders of enormous experience and reputation – Arthur Wellesley, later Duke of Wellington, and Jean de Dieu Soult. In Soult, Wellesley met one of his most formidable opponents and they confronted each other during one of the most remarkable, and neglected, of the Peninsular campaigns. Soult’s invasion of Portugal is rarely studied in great depth and, likewise, the offensive Wellesley launched, which defeated and expelled the French, has also received scant coverage. As well as giving a fresh insight into the contrasting characters of the two generals, the narrative offers a gripping and detailed, reconstruction of the organization and experience of a military campaign 200 years ago.

David Buttery has established a reputation as a leading historian of nineteenth-century British military history. He has made a particular study of the Napoleonic and Crimean wars. He has worked in newspapers and museums and has published extensively in many of the leading military history periodicals including the Victorian Military Society’s journal, The Leicestershire Chronicle and Military Illustrated. His most recent books are Wellington Against Massena: The Third Invasion of Portugal 1810-1811, Messenger of Death: Captain Nolan and the Charge of the Light Brigade, Wellington Against Junot: The First Invasion of Portugal 1807-1808 and the Waterloo Battlefield Guide.