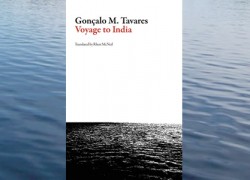 Voyage to India is the story of Bloom, our hero, as he makes his way from Lisbon to India in a decidedly non-heroic age. Gone are the galleons, gone is god; so too the swords of the swashbuckler and sacerdotal certainty. In such an era, where is wisdom to be found? Bloom―ever deliberate, ever longwinded―takes his time getting to India, stopping first in London, then Paris and elsewhere in Europe, making friends, encountering enemies, recounting his life story, revealing the reasons for his flight from Lisbon and his vague hopes for and nagging fears about what he might find in India. Or within himself.

His is a melancholic itinerary, an attempt to learn and forget. As our narrator flatly declares: “Life proceeds and is monstrous.” Parodying The Lusiads, Luis de Camões’s sixteenth-century Portuguese epic of seafaring exploration and naval prowess, Tavares’s poem is a solemn requiem of sorts, an investigation into the psyche of humankind in a world where the advance of technology outpaces our ability (or desire) to theorize it, the search for wisdom has been abandoned, and old imperialist dreams have revealed themselves to be a postcolonial nightmare.

Gonçalo M. Tavares a Portuguese writer born in August, 1970 in Luanda, Angola. He published his first work in 2001 and since then has been awarded several important prizes, including the Saramago Prize in 2005. His books have been published in more than 30 countries and the book Jerusalem has been included in the European edition of 1001 Books to Read Before You Die – a guide of the most important novels of all time.

Rhett McNeil Rhett McNeil is a scholar, critic, and literary translator from Texas, where he graduated Phi Beta Kappa from UT-Austin with degrees in English, Portuguese, and Art History. He has an MA in Comparative Literature from Penn State University and is currently finishing a PhD in the same department, with a doctoral minor in Aesthetics. While at Penn State, he has taught courses in comparative literature, film, Spanish, and Portuguese. His translations include novels and short stories from some of the most innovative and accomplished authors on the world literary scene, including António Lobo Antunes, Enrique Vila-Matas, Gonçalo M. Tavares, João Almino, and A.G. Porta. Rhett also edited and translated a volume of short fiction by the Brazilian master Machado de Assis, who, along with Jorge Luis Borges, is the subject of his dissertation. His translation of Tavares’s Joseph Walser’s Machine was longlisted for the 2013 Best Translated Book Award.