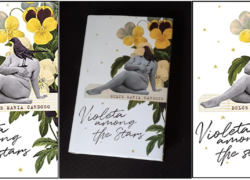 Violeta is driving along a lonely stretch of late-night motorway, in the midst of a fearsome storm. When her tired eyes close for just a second, her car veers off the road, rolls down a muddy embankment, over and over, and comes to rest on an empty stretch of sodden ground.

And as she lies amid the wreckage of her car, suspended between this world and the next, Violeta’s life will quite literally flash before her eyes . . .

Scenes from her past overlap with what happened right before the accident: her upbringing with her distant, critical mother; her father’s mysterious double-life; her troubled relationship with her daughter; her life on the road as she drives between waxing product-selling appointments with breaks at motorway service stations, the abuse from other travelers mocking her size, the alcohol, the risky encounters with lorry drivers on filthy public toilet floors…

Violeta Among the Stars weaves memories and feelings as Violeta reflects on her death, her life, her reality and her dreams. An astonishing portrait of a seemingly insignificant life, from one of Portugal’s greatest living writers.

Dulce Maria Cardoso is a Portuguese writer, who spent her childhood in Luanda, Angola after her parents moved there when she was an infant. Her family returned to Portugal following the Angolan War of Independence in 1975. She studied law at the University of Lisbon and worked as a lawyer before becoming a full-time writer. Her first novel, Campo de Sangue, won the Grand Prize Acontece de Romance, O Meus Sentimentos won the EU Prize for Literature and O Chão dos Pardais won the Portuguese Pen Club Award. The Return is her fourth novel.

Ángel Gurría-Quintana is a historian, journalist and literary translator from Spanish and Portuguese. He writes regularly for the book pages of the Financial Times. His translations include Other Carnivals: Short Stories from Brazil ( 2013) and The Return (2016) and Violeta among the Stars (2021) by Dulce Maria Cardoso.