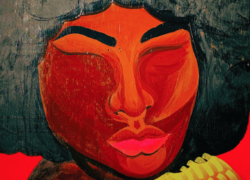 Written within the literary conventions of the Romantic movement and published decades before other Brazilian abolitionist novels, Ursula (1859) offers a sensitive and nuanced portrayal of enslaved African and Afro-Brazilian characters. While readers follow the story of the plantation owner’s daughter Ursula, her doomed romance with Tancredo, and her uncle’s diabolical schemes to entrap her in marriage, the novel’s power lies in Reis’s characterization of the enslaved Africans Tulio, Susana, and Antero. Shown in all their humanity as they narrate their personal histories and give voice to the abuse and injustices they have endured, these characters tell of the horrors of the Middle Passage, the daily indignities they face, and the brutality of their masters.

Maria Firmina dos Reis (1822-1917) was a Brazilian woman of mixed race, an educator, abolitionist, composer, poet, and fiction writer. Despite collaborating regularly with local newspapers, Reis was mostly forgotten until the late 1970s. Today her work has gained wide critical attention, and she is considered a pioneer of Afro-Brazilian literature.

Cristina Ferreira Pinto-Bailey, born and raised in Rio de Janeiro, is a writer, scholar, translator, and visiting associate professor at Washington and Lee University. She is author of Gender, Discourse, and Desire in Twentieth-Century Brazilian Women’s Literature.