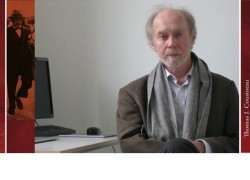 Thomas Cousineau, professor emeritus at Washington College, has released An Unwritten Novel: Fernando Pessoa’s The Book of the Disquiet a new book offering an insight into the work of Portuguese Modernist writer Fernando Pessoa. Published by Dalkey Archive Press, the book focuses on Pessoa’s writings collected in The Book of Disquiet published posthumously.

Cousineau discovered Pessoa’s posthumous book after reading a review by the British novelist Paul Bailey. In his review Bailey had written, “This book has moved me more than anything I have read in years. I have rarely encountered such exhilarating lugubriousness.” After reading the Book of Disquiet, Cousineau himself was convinced that Pessoa’s work is “one of the towering masterpieces of 20th century fiction.”

Tom Cousineau’s An Unwritten Novel is a fine study of Pessoa’s Book of Disquiet — the first of its kind in any language, so far as I know.  Cousineau does an excellent job of identifying and unraveling key strands in Pessoa’s work, which he then reweaves in various patterns to illuminate Fernando Pessoa, his semi-autobiographical persona Bernardo Soares, and their collaborative project(ion) of Disquiet.  An Unwritten Novel, well-written and well-argued, is an important contribution to Pessoa studies that will be much appreciated by Pessoa scholars and by anyone who admires the work of Portugal’s great Modernist writer.

The following content is the Preface to An Unwritten Novel: Fernando Pessoa’s The Book of Disquiet provided by the author with permission by the publisher.

An Unwritten Novel offers the general reader, as well as students and teachers of modernism, an “Ariadne’s thread” that will help them to find their way through Fernando Pessoa’s labyrinthine masterpiece, The Book of Disquiet. The thread itself is woven from the double-stranded observation made by Bernardo Soares (its putative author) that “Anything and everything, depending on how one sees it, is a marvel or a hindrance, an all or a nothing, a path or a problem.”

The “marvel-hindrance” that pervades The Book from beginning to end (despite its having neither a beginning nor an end but, rather, an endlessly recurring middle) is the loss of a stable and reassuring vision of the world and of one’s place within it. Soares’s discovery that he is actually an “exile” where he had thought himself to be a “citizen” produces throughout The Book expressions of hopeless nostalgia as well as daydreams of a paradise regained. “Once upon a time” echoes repeatedly as its signature refrain, but the disquiet to which it gives expression remains as obdurate as ever.

One possible solution to this predicament is to attempt to fill the void left by the collapse of inherited beliefs with a substitute faith. This leads Soares’s contemporaries, who are incapable of worshipping the God of their ancestors, to erect a compensatory, yet bogus, “cult of humanity” and Soares himself to attempt, albeit with equally unconvincing results, to erect a cult of the “superior man,” which he readily joins. The other solution is to treat this misfortune as an opportunity to devise a new mode of writing that is not tainted with nostalgia. At first glance, Soares appears ill-suited to such an undertaking. A mere assistant bookkeeper in a commercial enterprise, he seems to lack the most rudimentary literary gifts. By his own admission, he can’t write poetry and, on the evidence of his “factless autobiography,” he can neither create believable characters nor write convincing dialogue and narration. As though that weren’t enough, his aesthetic ideal – which he can’t possibly duplicate – is found in such monumental achievements as Virgil’s Aeneid and Dante’s Divine Comedy.

Fortunately, however, the various “hindrances” by which Soares is beset go hand-in-hand with the “marvel” that is The Book itself. Like the “aged man” in William Butler Yeats’s “Sailing to Byzantium,” The Book is a “paltry thing” whose soul nonetheless manages to “clap its hands and sing, and louder sing/For every tatter in its mortal dress.” However, rather than finding consolation, as Yeats does, in the vision of himself as a “golden bird,” Soares, a self-described “building in ruins,” produces an incongruous masterpiece in which the diminishment that he experiences as a personal crisis coexists with an artistic achievement in the form of what he calls “greater completeness.”

Ordinarily, a novelist achieves the effect of completeness by assembling the various parts of his novel so that they contribute to an organized whole. Details of place, for example, are gathered in a way that creates a setting; episodes are arranged in a logical sequence to form a plot; the protagonist is part of a larger human community; dialogue and narration each makes its distinct contribution to the novel as a whole; and the roles of the protagonist, who experiences events, and the author, who produces the work in which they are represented, are clearly distinguished as well. In The Book, however, all five of these narrative elements are “unwritten.” Lisbon is scarcely present as its setting and the three details that are mentioned—office, rented-room, and neighboring streets—are only minimally described. Plot dissolves into a series of events that do not cohere into a sustained action. Soares lives in nearly complete isolation from his fellow Lisboetas; both narration and dialogue virtually disappear, as does the distinction between the author and the protagonist.

Each of these “mutilations” of a properly written novel, however, prepares the way for a compensatory form of “greater completeness.” On the level of setting, the office, the room, and the neighboring streets become gateways to the infinite. The episodic events that never cohere into a unified plot achieve the intensity of “modest apocalypses” which acquire an aura of timelessness. Soares, an undistinguished bookkeeper who records his company’s accounts in a ledger, metamorphoses into a writer through whom the works of his great predecessors—including Dante, Shakespeare, and Milton—are uncannily revived, albeit in the incongruous form of an “unwritten novel.” The eclipse of narration and dialogue leads to the emergence of a form of writing—what Soares calls “the written voice”—that hovers uncannily between speaking and silence. Finally, the blurring of the distinction between the author and his protagonist produces a hybrid, indeterminate form of authorship that has led some readers of The Book to attribute it to Pessoa/Soares.

The most intriguing aspect of the relationship between the mutilation which is, for Soares, a personal predicament and the dismemberment of inherited novelistic conventions that leads to greater completeness is that it cannot be interpreted as the expression of a conscious authorial intention. This is partly because we are not quite sure who actually wrote (or didn’t write) The Book, but also because neither Pessoa nor Soares actually wanted to produce a work that was merely a hodge-podge of fragmentary texts. Pessoa admired the architectural perfection of the great epic poems and achieved something resembling it, albeit on a much smaller scale, in his symbolist epic entitled Message. Curiously, it was when they renounced—or, more accurately, were deprived by a combination of their sheer inability to write a novel and the circumstance of Pessoa’s untimely death at age forty-seven—the brilliant mastery of one’s materials that they admired in Virgil and Dante and which Pessoa had displayed so impressively in Message, that Pessoa/Soares created—or, more accurately, had created for them—if not the most perfectly constructed of modernist masterpieces, then certainly one of the most sublime.

(*) Thomas J.  Cousineau is Professor of English (Emeritus) at Washington College in Maryland and the author of four previous books: Waiting for Godot: Form in Movement, After the Final No: Samuel Beckett’s Trilogy,  Ritual Unbound: Reading Sacrifice in Modernist Fiction, and Three-Part Inventions: The Novels of Thomas Bernhard.  He is currently working on a book, to be entitled The Séance of Reading that explores the uncanny return of the Daedalus legend in modernist writing.  The website for this project is at https://sites.google.com/site/thedaedaluscomplex/home.