Book: ‘Ualalapi: Fragments from the End of Empire’ by Esaú Cossa- Editor’s Note 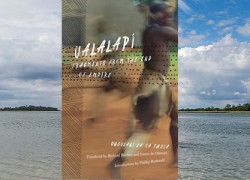 Ungulani Ba Ka Khosa first published Ualalapi: Fragments from the End of Empire in Portuguese in 1987. Named one of Africa’s hundred best books of the twentieth century, it reflects on Mozambique’s past and present through interconnected narratives related to the last ruler of the Gaza Empire, Ngungunhane.

Defeated by the Portuguese in 1895, Ngungunhane was recuperated by Mozambique’s post-independence government as a national and nationalist hero. The regime celebrated his resistance to the colonial occupation of southern Mozambique as a precursor to the twentieth-century struggle for independence.

In Ualalapi, Ungulani challenges that ideological celebration and portrays Ngungunhane as a despot, highlighting the violence and tyranny that were markers of the Gaza Empire. This fresh look at the history of late nineteenth-century southeast Africa provides a prism through which to question the machinations of power in Mozambique during the 1980s.

Francisco Esaú Cossa (pseudonym Ungulani Ba Ka Khosa, also spelled as Ungulani ba ka Khosa) is a Mozambican writer born August 1, 1957, in Inhaminga, Sofala Province. Khosa completed elementary school in Sofala, and high school in Zambezia. In Maputo he attended Eduardo Mondlane University, receiving a bachelor’s degree in History and Geography. He then worked as a high school teacher. In 1982, Khosa worked for the Ministry of Education for over a year. Six months after leaving the Ministry of Education, he was invited to work for the Writer’s Association. He initiated his career as a writer with the publication of several short stories and was one of the founders of the magazine Charrua of the Associação dos Escritores Moçambicanos (AEMO). It was his experiences in Niassa and Cabo Delgado, where poorly organized reeducation camps were located, that gave him the urge to write and expose this reality. He is the author of several books, including Choriro and Entre as Memórias Silenciadas. Ungulani Kossa is Director of Mozambique’s Instituto Nacional do Livro e do Disco.

Phillip Rothwell is King John II Professor of Portuguese at the University of Oxford and the author of A Canon of Empty Fathers: Paternity in Portuguese Narrative and A Postmodern Nationalist: Truth, Orality and Gender in the Work of Mia Couto. Professor Rothwell specializes in the literatures and cultures of Portugal and Lusophone Africa. He favors psychoanalytic theory as a tool to furthering our understanding of Portuguese culture and its imperial aftermaths. An authority on the Mozambican writer Mia Couto and the Angolan author Pepetela, his current research focuses on disavowal as a structuring discourse in Portuguese colonialism.

Richard Bartlett and Isaura de Oliveira have translated a number of books from the Portuguese, including Lília Momplé’s Neighbours: The Story of a Murder.