Book: ‘This Gulf of Fire’ The Destruction of Lisbon – Editor’s Note 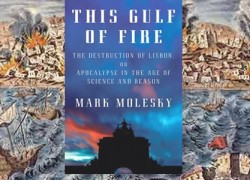 A captivating and definitive account of the greatest natural disaster ever to hit the modern Western world.

On All Saints Day of 1755, the tremors from a magnitude 8.5 earthquake swept furiously from its epicenter in the Atlantic Ocean toward the Iberian Peninsula. Nowhere was it felt more than in Lisbon, then the thriving capital of a great global empire. In a few minutes most of Lisbon was destroyed – but that was only the beginning. A tsunami swept away most of the ruined coast along the Tagus River and carried untold souls out to sea.

When fire broke out across the city, the surviving Lisboetas were subject to a firestorm reaching temperatures over 1,832°F. Drawing on a wealth of new sources, on modern science (geology did not exist then), and on a sophisticated grasp of Portuguese history, Molesky gives us the definitive account of the destruction, of history’s first international relief effort, and of the dampening effects these events had on the optimistic spirit of the Enlightenment.

Mark Molesky is a graduate of the University of Michigan and received his Ph.D. from Harvard University. He specializes in the intellectual, cultural, and political history of modern Europe and is currently an associate professor of history at Seton Hall University. He lives in New York City.

INTERVIEW: NPR’s Robert Siegel talks to Mark Molesky, associate professor at Seton Hall University, about his book, This Gulf of Fire: The Destruction of Lisbon, or Apocalypse in the Age of Science and Reason.