Book: ‘The Wind Whistling in the Cranes’ by Lídia Jorge – Editor’s Note 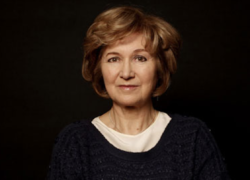 From the winner of the prestigious FIL Prize in Romance Languages comes this masterpiece saga, set in the twilight of the late twentieth century, of two clashing families in coastal Portugal. With the grand sweep of Elena Ferrante’s Neapolitan novels, this enduring tale transports us to a picturesque seaside town haunted by its colonial past.

Considered one of Europe’s most influential contemporary writers, Portuguese novelist Lídia Jorge has captivated international audiences for decades. With the publication of The Wind Whistling in the Cranes, English-speaking readers can now experience the thrum of her signature poetic style and her delicately braided multicharacter plotlines, and witness the heroic journey of one of the most maddening, and endearing, characters in literary fiction.

Exquisitely translated by Margaret Jull Costa and Annie McDermott, this breathtaking saga, set in the now-distant 1990s, tells the story of the landlords and tenants of a derelict canning factory in southern Portugal. The wealthy, always-scheming Leandros have owned the building since before the Carnation Revolution, a peaceful coup that toppled a four-decade-long dictatorship and led to Portugal’s withdrawal from its African colonies. It was Leandro matriarch Dona Regina who handed the keys to the Matas, the bustling family from Cape Verde who saw past the dusty machinery and converted the space into a warm―and welcoming―home.

When Dona Regina is found dead outside the factory on a holiday weekend, her body covered in black ants, her granddaughter, Milene, investigates. Aware that her aunts and uncles, who are off on vacation, will berate her inability to articulate what has just happened, she approaches the factory riddled with anxiety. Hours later, the Matas return home to find this strange girl hiding behind their clotheslines, and with caution, they take her in . . .

“Some said that Milene had been found wandering near the golf course. . . Still others that she must have spent those five days at the beach, eating raw fish and sleeping out in the open. . .”

Days later, the Leandros realize that Milene has become hopelessly entangled with their tenants, and their fear of political and financial ruin sets off a series of events that threatens to uproot the lives of everyone involved. Narrated with passionate, incandescent prose, The Wind Whistling in the Cranes establishes Lídia Jorge as a novelist of extraordinary international resonance.

“The novel moves rhythmically, as if wavering under the blazing sun…This is a thrillingly immersive ‘parable about life, about the struggle between rich and poor, between one race and another.’ Even the trees and surrounding landscape–‘mute figures who, of course, had knowledge and memory’–have their point of view.”
― Anderson Tepper, New York Times Book Review

“[A] captivating Romeo and Juliet–style love story set in the Algarve of Portugal . . . Jorge blends the personal drama with insight on the compounding social issues, making the account sing on several levels. The result is brilliant and trenchant.”
― Publishers Weekly, starred review

“Manages to recapitulate many of the issues present in post-colonial Portugal . . . Jorge’s narrative ranges from the lyrical to the mundane but conveys the universality of a specific, familial place…. A dose of near-contemporary history tempered by a page-turning family saga and romance.”
― Kirkus Reviews

Lídia Jorge is a leading figure in Portuguese literature whose accolades include European Writer of the Year. Considered one of Europe’s most influential contemporary writers, Portuguese she  has captivated international audiences for decades.

Fiction: ‘The Wind Whistling in the Cranes’ Review– WSJ

Title: The Wind Whistling in the Crane