Book: The Tuner of Silences by Mia Couto – Editor’s Note 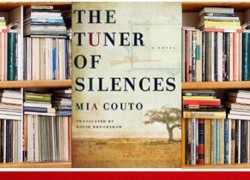 The eighth novel by The New York Times acclaimed Mia Couto, The Tuner of Silences, is the story of Mwanito’s, an African boy’s quest for the truth, struggling to reconstruct a family history that his father is unable to discuss. With the young woman’s arrival in Jezoosalem, however, the silence of the past quickly breaks down, and both his father’s story and the world are heard once more.

The Tuner of Silences was heralded as one of the most important books to be published in France in 2011 and remains a shocking portrait of the intergenerational legacies of war. Now available for the first time in English translation, The Tuner of Silences has been published to acclaim in more than half a dozen countries.

Mia Couto was born in Beira, Mozambique in 1955. He dropped out of medical school to join the struggle against Portuguese colonialism in his country. When Mozambique became independent, in 1975, Couto was named Director of Information in the revolutionary government, and served as editor of two newspapers. In the 1980s, he returned to university to study environmental biology while beginning his writing career.

Couto is the author of more than 25 books of fiction, essays and poems. His novels and short story collections have been published in 20 languages. Two of his novels have been made into feature films and his books have been bestsellers in Africa, Europe and South America. In 2002, a committee of African literary critics named his novel Sleepwalking Land one of the twelve best African books of the twentieth century. His novels have been awarded major literary prizes in Mozambique, Portugal, Brazil and Italy.

Mia Couto lives with his family in Maputo, Mozambique, where he works as an environmental consultant and a theatre director.

David Brookshaw, the translator, is a professor of Hispanic, Portuguese, and Latin American Studies at the University of Bristol (London), and the General Editor of the HiPLA Monograph Series. He is the translator of six books by Couto, including Sleepwalking Land and The Last Flight of the Flamingo.