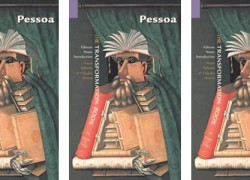 When, sight unseen, I agreed to review the latest Pessoa book, I did not know what I was letting myself in for. Although I’ve kept up pretty much with all the books presenting collections of materials, largely previously unpublished, I was not prepared for the put-together collection of materials comprising The Transformation Book. After a first quick perusal of the volume, I was exacerbated enough (or, perhaps, only puzzled enough) to dash off these lines:

The songwriters called them “sectional” introductions that created a bridge in a musical between the prosaic action of the play and the “real” song, easing the response to what otherwise might seem to be an abrupt break in the action of the play. Not in all its senses or its wider implications, but so, too, might one see the poet’s overall plan. Set many hares running, projects described, books given titles, tables of contents (set in flux) of works still in the works, few near completion, most destined to languish in the optative mood, with nary a hope that anyone might live long enough (or have the energy) to bring them to book. Thus how lucky then to inherit a bevy of self-reproducing workers who would bring order to the remains, even to the point of producing materials that the Master, in their opinion, would have without a doubt have come up with to fulfill a reach if not a grasp. But then there is a shibboleth about “the making of books.”

Of course, to settle for this as one’s response to The Transformation Book would hardly qualify as compliance with the due diligence required of any reviewer. So, a couple of weeks later, I took a deep breath and once again picked up the book. Once more into the breach, I told myself.

In a long introduction the editors offer a rationale for putting these many seemingly disparate works together, following hints embedded in sample pages featuring tried-out titles, followed by lists of works, some written, other announced, but barely started or reminders of pieces that would, at Pessoa’s death, not have been started at all or, for all one knows, abandoned or forgotten along the way.

Pessoa’s idiosyncratic ways of thinking are parodied in a quasi-syllogism that the editors of this The Transformation Book quote in their introduction:

The “therefore” that line 5 calls for is priceless.

Fortunately, the creators of this The Transformation Book are clearer about their intentions and more traditionally logical in their description of what they have produced.

Conceived by Pessoa in 1908, a year of great social and cultural transformation in Portugal, The Transformation Book was designed to reflect and advance social & cultural transformation in Portugal and beyond. Moving between a number of literary forms, including poetry, fiction, & satire as well as essays on politics, philosophy, and psychiatry, The Transformation Book marks one of the fundamental stages in Pessoa’s elaboration of a new conception of literary space, one that he came to express as a “drama in people.” Alexander Search, Pantaleão, Jean Seul de Méluret & Charles James Search are the four “pre-heteronyms” to which the texts of The Transformation Book are attributed. These four figures constitute a plural literary microcosm — a world that Pessoa makes, but that is occupied by a multiplicity of authors — & clearly anticipate the emergence of Pessoa’s heteronyms.

If my final judgment borders on something like a Scotch verdict: not proven, it begins with the problem I have with seeing in this The Transformation Book a constructed version of a unified book that Pessoa never managed to come close to putting together in anything resembling its final form.

Nor is this book acceptable as a collection made up of scattered writings on a given subject or on a theme that might be put between the covers of a book, for everything pertaining to Pessoa has become of interest. No, when someone has tried to piece out a project that was, perhaps, half-baked to begin with, then present it as the book that Pessoa somewhere indicated that he would construct, it is annoyingly unsatisfactory. And that, I’m afraid, is the case with The Transformation Book. 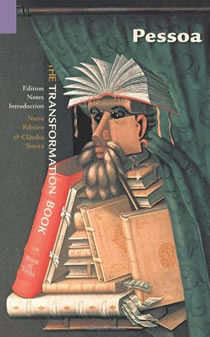 That said, it must be acknowledged that The Transformation Book now exists and must be reviewed. It is divided into 4 parts: 1. Alexander Search, 2. Pantaleão, 3. Jean Seul de Méluret, and 4. Charles James Search–Fragments of Translations. The first section is made up of The Portuguese Regicide and the Political Situation in Portugal, The Philosophy of Rationalism, The Mental Disorder of Jesus, Delirium and Agony; the second, A Psychose Adeantativa, As Visões de Sñr Panteleão, and A Nossa Administração Colonial; the third, Des Cas d’Exhibitionnisms, La France en 1950, and Messieurs les Souteneurs; and the fourth, Anthero de Quental’s ‘Complete Sonnets,’ Sonnets (chosen) of Camoens, Guerra Junqueiro–Choice. These four sections are followed by Addenda running to some ninety pages (keyed to the four sections comprising the body of the book, along with a bibliography. Throughout there is a lot of numbering to buttress the order in which the items are presented and to suggest (I presume) that the effect overall may be incremental. But if so, to me the order is inconsequential and the intended incremental effect escapes me. If we take the book to have resulted from efforts to flesh out titles that appear on a list of tasks for the future, one can only decide that the finished product delivers much less than it promises. Furthermore, for every text that the average reader of Pessoa encounters for the first time in this book there are many that he or she has become familiar with elsewhere context. It is good to read once again the poetry of a mainly whining Alexander Search, stretching out his lines and digging away at rhymes in the orthodoxy of the sonnet, but their new context in this book adds little or nothing to our understanding of Search or his poems. Moreover, Pessoa would live to do much better than any of this. Take Search’s “A Day of Sun,” which runs to 8 quatrains, beginning: “I love the things that children love / Yet with a comprehension deep / That lifts my pining soul above / Those in which life as yet doth sleep” and ends, 7 quatrains later: “And in a strange way undefined / Lose in the one & living Whole / The limit that I call my mind, / The bounded thing I call my soul.” and set it alongside Alberto Caeiro’s untitled poem: “É talvez o último dia da minha vida. / Saudei o sol, levantando a mão direita, / Mas não o saudei, dizendo-lhe adeus. / Fiz sinal de gostar de o ver antes: mais nada.” One is an exercise; the other an achievement.

It is pretty much accepted that Pessoa was an accumulator, almost exclusively, it seems, of sheets or scraps of paper on which he had written. Had he lived long enough to look over his accumulation, it is curious to ponder how much of what makes up this The Transformation Book would have made the cut. As it stands before me, I will venture to say that this book is a concoction that at best will try the patience of even the most committed, the most rabid of Pessoa’s myriad readers — I stop short of calling us “junkies” — for whom everything by the Master seems worth parsing and, sooner or later, packaged for consumption.

Other Posts by Professor George Monteiro