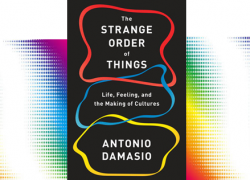 From one of our preeminent neuroscientists: a landmark reflection that spans the biological and social sciences, offering a new way of understanding the origins of life, feeling, and culture.

The Strange Order of Things is a pathbreaking investigation into homeostasis, the condition of that regulates human physiology within the range that makes possible not only the survival but also the flourishing of life.

Antonio Damasio makes clear that we descend biologically, psychologically, and even socially from a long lineage that begins with single living cells; that our minds and cultures are linked by an invisible thread to the ways and means of ancient unicellular life and other primitive life-forms; and that inherent in our very chemistry is a powerful force, a striving toward life maintenance that governs life in all its guises, including the development of genes that help regulate and transmit life.

In The Strange Order of Things, Damasio gives us a new way of comprehending the world and our place in it.

“Nietzsche would have given four cheers for this intricately argued book, which is at once scientifically rigorous and humanely accommodating, and, so far as this reviewer can judge, revolutionary….From Plato onwards, western philosophy has favoured mind over “mere” body, so that by the time we get to Descartes, the human has become hardly more than a brain stuck atop a stick, like a child’s hobbyhorse. This is the conception of humanness that Damasio wishes to dismantle. For him, as for Nietzsche, what the body feels is every bit as significant as what the mind thinks, and further, both functions are inextricably intertwined….There are echoes here too of William James, that most endearing of philosophers, as when Damasio pauses for a brief, Jamesian consideration of the anomalous fact that for all the hi-tech sophistication of modern life, we still cling to the primitive pleasure and reassurance of the domestic fireplace. And James would have been delighted by Damasio’s “everydayness”, his readiness to acknowledge the fundamental underpinnings of even our highest endeavours….But Damasio, while ever ready to salute his predecessors and peers, is wholly his own man, and The Strange Order of Things is a fresh and daring effort to identify the true spring and source of human being – of the being, in fact, of all living things – namely feeling.”—John Banville, The Guardian

Philosophy; and director of the Brain and Creativity Institute at the University of Southern California. Awards he has received include the Prince of Asturias Prize in Science and Technology, the Grawemeyer Award, the Honda Prize, and the Pessoa and Signoret prizes. In 2017 he received the Freud Medal from the Royal Dutch Academy of Sciences. Damasio is a member of the National Academy of Medicine and a fellow of the American Academy of Arts and Sciences and the Bavarian Academy of Sciences. He is the author of Descartes’ Error, The Feeling of What Happens, Looking for Spinoza and Self Comes to Mind, all of which have been published in translation and are taught in universities throughout the world.