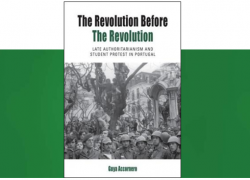 Histories of Portugal’s transition to democracy have long focused on the 1974 military coup that toppled the authoritarian Estado Novo regime and set in motion the divestment of the nation’s colonial holdings. However, the events of this “Carnation Revolution” were in many ways the culmination of a much longer process of resistance and protest originating in universities and other sectors of society. Combining careful research in police, government, and student archives with insights from social movement theory, The Revolution before the Revolution broadens our understanding of Portuguese democratization by tracing the societal convulsions that preceded it over the course of the “long 1960s.”

Guya Accornero is a research fellow at the Centre for Research and Studies in Sociology, Lisbon University Institute (CIES-IUL). She has published articles in journals such as West European Politics, Democratization, and Cultures and Conflicts, and she is the co-editor (with Olivier Fillieule) of the volume Social Movement Studies in Europe in Berghahn’s “Protest, Culture, and Society” series.