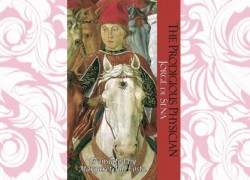 This astonishingly erotic and ironic novel is set in vaguely medieval times, but the tone is starkly modern. A young gentleman is travelling on horseback, and stops by a river to rest and bathe. As he is lying there naked after bathing, three maidens appear and, trying to avert their gaze from the young man’s many charms, they tell him the story of their recently widowed mistress, who is dying of grief. She can only be saved by a man who fulfils three conditions: he must be the son of a king, a great physician, and a virgin. Since he more or less fulfils these conditions, the young man duly goes to the castle where he saves the queen, who immediately falls in love with her savior. But are the maidens, the queen or the prodigious physician what they seem? In this novel, nothing is certain and nothing is ever entirely over.

Jorge de Sena (1919-78) was a Portuguese poet, critic, essayist, novelist, dramatist, translator and university professor. His opposition to the Salazar dictatorship in Portugal led to him go into voluntary exile in Brazil in 1959 and, after the military coup in Brazil in 1964, he moved to the United States. He taught first at the University of Wisconsin and, for the last eight years of his life, at the University of California in Santa Barbara, where he was Professor of Comparative Literature. After the bloodless coup in Portugal on 25 April 1974, he did return to Lisbon, but when no university there offered him a teaching post, he went back to California, feeling embittered and disillusioned, and died of cancer four years later.