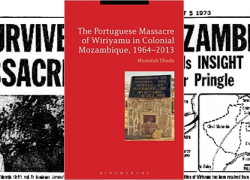 In his in-depth and compelling study of perhaps the most famous of Portuguese colonial massacres, Mustafah Dhada explores why the massacre took place, what Wiriyamu was like prior to the massacre, how events unfolded, how we came to know about it and what the impact of the massacre was, particularly for the Portuguese empire.

Spanning the period from 1964 to 2013 and complete with a foreword from Peter Pringle, this chronologically arranged book covers the liberation war in Mozambique and uses fieldwork, interviews and archival sources to place the massacre firmly in its historical context. The Portuguese Massacre of Wiriyamu in Colonial Mozambique, 1964-2013 is an important text for anyone interested in the 20th-century history of Africa, European colonialism and the modern history of war.

Professor Paolo Israel, of the University of the Western Cape, South Africa wrote that “This book is a feat of investigative research and layered storytelling. Dhada unearths with exceptional degree of detail the events surrounding the infamous Portuguese colonial massacre of Wiriyamu, as well as the ways in which competing narratives about this event were crafted, buried, revealed, diffused, and contested. The book leads the reader through a maze of documents and memories, until a shattering vision of the destruction of Wiriyamu in which even the trees come to life to testify. The writing is alive with personal passion spanning decades; rich, sophisticated, and utterly compelling.”

Mustafah Dhada, born and brought up in Mozambique, is Associate Researcher at the Center for Social Studies, Coimbra University, Portugal, and Professor of History at California State University, Bakersfield, USA. He is the author of Warriors at Work (1993) and The Portuguese Massacre of Wiriyamu in Colonial Mozambique, 1964-2013 (2015).