Book: ‘The Portuguese in the Creole Indian Ocean’ – Editor’s Note 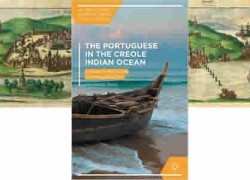 When the Portuguese first entered the Indian Ocean centuries ago, they intruded upon an ancient creole and cosmopolitan world. Also, they entered a world with age-old connections to the Mediterranean. This book explores some of the intriguing interstices of colonial and other spaces in the ocean, through a scrutiny of personages, texts, and authors between the sixteenth and twenty-first centuries, in a variety of locales, namely, Goa (India), Macau (China), Malabar (Kerala, India), and Melaka (Malaysia).

As the narrative goes back and forth between the ethnographic present and the past, it unearths the traces of old connected histories, such as those that link South and Southeast Asia. Furthermore, it explores similarities and differences with the Atlantic, especially in what concerns creolization and cosmopolitanism. It is an attempt by a Brazilian scholar to apply perspectives developed in the Atlantic – in particular, creolization – to Indian Ocean spaces and themes.

Fernando Rosa in his latest book, The Portuguese in the Creole Indian Ocean. Essays in Historical Cosmopolitanism (Palgrave, 2015), revisits the Atlantic and Indian Ocean Creole port city through literary works in French, Indonesian, and Portuguese; historical cosmopolitanism in Kerala (Malabar Coast) in India; the linguistic work of Msgr. Sebastião Dalgado on Konkani, Sanskrit, and Sri Lankan Indo-Portuguese Creole in early twentieth century Goa; the ethnography and history of Creole and Portuguese identities and languages in both Macau (China) and Melaka (Malaysia); and finally the intricacies and mutual connections between various sixteenth and seventeenth century texts in Arabic, Malay, and Portuguese and their respective authors, compilers, etc, in Goa, the Malabar Coast, and the Straits of Melaka. He also scrutinizes the interlinked Indian Ocean and Mediterranean networks described in these texts.

Fernando Rosa is a Brazilian anthropologist and historian who has worked on and lived in various Indian Ocean societies, particularly South Africa (Cape Town), India (Kerala and Goa), Peninsular Malaysia, Macau (China), and Indonesia. He has also lived and worked in Atlantic societies such as Brazil and parts of the Caribbean (including Martinique, Suriname, Aruba, and Curaçao). He is now a research affiliate with the English department, Stellenbosch University, South Africa. Moreover, he has lived and carried out research for five years in Malaysia (mostly in Kuala Lumpur and Melaka). His mains fields are African studies and Indian Ocean studies. His research interests lie in the domain of oceanic intellectual networks and related languages (and their archives), as well as in processes of creolization and cosmopolitanism.