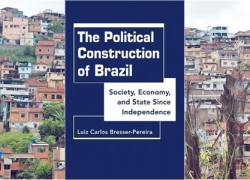 Spanning the period from the country’s independence in 1822 through early 2015, Luiz Carlos Bresser-Pereira assesses the trajectory of Brazil’s political, social, and economic development. Bresser-Pereira draws on his decades of first-hand experience to shed light on the many paradoxes that have characterized Brazil’s polity, its society, and the relations between the two across nearly two centuries.

“A big and bold book by a leading Brazilian public intellectual and scholar-practitioner. Whether or not one agrees with his conclusions, Bresser-Pereira reaches deep into the history of the turbulent twentieth century to set the terms for a new debate on Brazil’s development in the twenty-first” — wrote Matthew Taylor, from American University, in his review of this book.

Luiz Carlos Bresser-Pereira, a Brazilian economist and social scientist, teaches at the Getulio Vargas Foundation, in São Paulo where he edits the Brazilian Journal of Political Economy since 1981. He served as Finance Minister (1987); Minister of Public Administration (1995–1998); and of Science and Technology (1999). His work as economist is currently focused on the theoretical side, on new developmentalism, development macroeconomics, the methodological critique of neoclassical economics, the theory of the democratic, social, and developmental state, and on the critique of neoliberalism and the applied side on the economy of Brazil and its society. Born in São Paulo, in 1934, he holds a bachelor’s degree in Law by the University of São Paulo (1957), a MBA, by Michigan State University (1960) and a PhD (1974) by University of São Paulo. He teaches at the Getulio Vargas Foundation since 1962. He was visiting professor at the Pantheon-Sorbonne University (1977), at the École des Hautes Études en Sciences Sociales (2003-2010), and at the University of São Paulo (1989 and 2002–03). He was also visiting fellow at Oxford University in Nuffield College and St Antony’s College in 1999 and 2001.