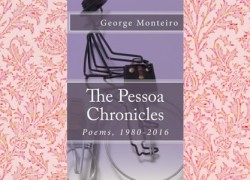 The least known of the great European Modernist poets of the twentieth century, Fernando Pessoa was born in 1888. A virtuoso of poetic voices, he created a coterie of distinct heteronyms, individual voices for whom he created full biographies and full bodies of work that were not only distinctive and original but so distinguished that several have earned an honored place in the annals of world poetry. The Pessoa Chronicles—a collection, a scrapbook, an accumulation, an offering, take your pick—had its beginning as a book around 1990. Some of the entries in The Pessoa Chronicles are expressed in the (imagined) voice of Pessoa speaking for himself or that of one of his heteronyms. Many others are in an unidentified voice, usually indistinguishable from Monteiro’s.

George Monteiro, professor emeritus of English and of Portuguese and Brazilian Studies at Brown University, is the author or editor of books on Henry James, Henry Adams, Robert Frost, Stephen Crane, Emily Dickinson, Fernando Pessoa, and Luis de Camões, among others. He served as Fulbright lecturer in American Literature in Brazil–São Paulo and Bahia–Ecuador and Argentina; and as Visiting Professor in UFMG in Belo Horizonte. In 2007 he served as Helio and Amelia Pedroso / Luso-American Foundation Professor of Portuguese, University of Massachusetts Dartmouth. Among his recent books are Stephen Crane’s Blue Badge of Courage, Fernando Pessoa and Nineteenth-Century Anglo-American Literature, The Presence of Pessoa, The Presence of Camões, Conversations with Elizabeth Bishop, Critical Essays on Ernest Hemingway’s A Farewell to Arms, Fernando Pessoa and Nineteen-Century Anglo-American Literature and Elizabeth Bishop in Brazil and After: A poetic Career Transformed. Among his translations are Iberian Poems by Miguel Torga, A Man Smiles at Death with Half a Face by José Rodrigues Miguéis, Self-Analysis and Thirty Other Poems by Fernando Pessoa, and In Crete, with the Minotaur, and Other Poems by Jorge de Sena. He has also published two collections of poems, The Coffee Exchange and Double Weaver’s Knot.