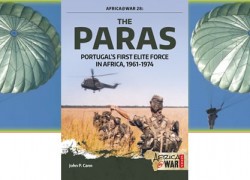 Portuguese paratroopers or “paras” began as a stepchild of the army and found a home in the Portuguese Air Force in 1955. Initially, the post-World War Two Portuguese Army seemed to have had mixed emotions about the need for elite, special-purpose forces that operated in small units with the attendant flexibility and elevated lethality. Shock troops have been traditionally controversial, and even the vaunted military theorist Baron Karl von Clausewitz saw little point in them.

The history of the paras in the Portuguese Army is illustrative of this ambivalent view. Nevertheless, in a “war of the weak” in which insurgents avoid government strengths and exploit its vulnerabilities using agility, deception, and imagination, such small, crack government units are particularly well suited to counterinsurgency operations. This appreciation emerged with the threat of a new kind of war in Portuguese Africa, an insurgency, and the new and visionary Air Force well understood the potential of paras when combined with the mobility of the helicopter.

The Air Force saw an urgent need for troops who could fight an unconventional war, who could not only defeat an enemy but separate him from the population in which he sought concealment and support and on which he depended for funding, recruits, and intelligence. These were specialized warfighters who in one minute were physically destroying an insidious enemy and in the next administering aid and support and protecting a vulnerable population. These were just the troops that Portugal would require for military success in its approaching battle fought between 1961 and 1974 to retain its African possessions, and this vision would be realized on the African battlefield with devastating consequences.

This book tells the paras’ story as researched from Portuguese sources. It details how they were formed and trained and how they developed their imaginative, effective, and feared tactics and applied them in operations to protect the population from insurgent predations and destroy a vicious enemy.

John P. Cann is an Adjunct Research Staff Member at the Institute for Defense Analyses, a former Scholar-in-

Residence at the University of Virginia, and the retired Professor of National Security Studies at Marine Corps University. He earned his doctorate in the Department of War Studies at King’s College, University of London, in 1996 and subsequently published Counterinsurgency in Africa: The Portuguese Way of War, 1961-1974 and Brown Waters of Africa: Portuguese Riverine Warfare, 1961-1974. He is likewise the author of The Flechas – Insurgent Hunting in Eastern Angola 1965-1974 and some thirty articles on conflict in Africa.
Cann is a retired naval captain and flight officer specializing in open-ocean-reconnaissance aviation with a variety of aviation assignments, including command. He also served on the staffs of the Chief of Naval Operations and the Secretary of Defense and was awarded the Portuguese Medal of Dom Afonso Henriques and the Portuguese Navy Cross Medal. He is an Associate Member of the Portuguese Academia de Marinha.