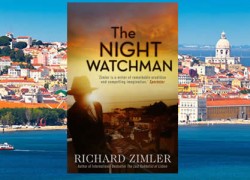 Chief Inspector Henrique Monroe of the Lisbon Police Department is not your usual cop. Eccentric, elliptical – and stunningly observant – his peculiar behavior at crime scenes is legendary. But his colleagues put up with it because, in the end, Monroe’s the best of the best. But he has a double-sided secret. And when he’s called to investigate the brutal slaying of well-connected Portuguese businessman Pedro Coutinho, it’s not just the murder case that will unravel – but his own identity, too. As Monroe’s investigations lead him deep into a torrid world of shady political corruption and sexual violence, the details of the case trigger memories from his childhood in rural Colorado – memories he has travelled far, and worked hard, to hide. His behavior becomes even more upsetting and inappropriate than usual, and even his family – his wife, his brother and his two young boys – start to fear for the man they thought they knew. Henrique struggles to move his investigation forward whilst keeping the walls of his identity from crumbling. And then, another violent crime changes his life forever, destroying any chance he has of continuing to keep his secret …A chilling psychological mystery, The Night Watchman is a uniquely moving portrait of a troubled police detective and his family when a single crime reveals the damaging impact of abuse and the tragic truth about an entire nation.

Richard Zimler was born in New York but has lived in Portugal for the past 30  years. He has written six novels, most recently The Warsaw Anagrams. Zimler’s novels have been international bestsellers; he has won numerous prizes and is a regular contributor to the Los Angeles Times Book Review.

Richard Zimler was born in Roslyn Heights, a suburb of New York, in 1956. After earning a bachelor’s degree in comparative religion from Duke University (1977) and a master’s degree in journalism from Stanford University (1982), he worked for eight years as a journalist, mainly in the San Francisco Bay area. In 1990, he moved to Porto, Portugal, where he taught journalism for sixteen years, first at the College of Journalism and later at the University of Porto. Richard has published eight novels over the last 15 years. In chronological order, they are: The Last Kabbalist of Lisbon, Unholy Ghosts, The Angelic Darkness, Hunting Midnight, Guardian of the Dawn, The Search for Sana, The Seventh Gate and The Warsaw Anagrams. His novels have appeared on bestseller lists in 12 different countries, including the USA, Great Britain, Portugal, Brazil, Italy, and Australia. Richard has won numerous prizes for his work, including the Prix Alberto Benveniste in 2009, for Guardian of the Dawn (for Jewish-themed fiction), and the 1998 Herodotus Award, for The Last Kabbalist of Lisbon (Best First Historical Novel). His latest novel, The Warsaw Anagrams, was chosen as 2010 Book of the Year in Portugal, by both the country’s main literary monthly (LER) and high school teachers and students. Hunting Midnight, The Search for Sana and The Seventh Gate have all been nominated for the International IMPAC Literary Award, the richest prize in the English-speaking world. He was also granted a 1994 U.S. National Endowment of the Arts Fellowship in Fiction. The Last Kabbalist of Lisbon, Hunting Midnight, Guardian of the Dawn and The Seventh Gate form the “Sephardic Cycle,” a group of inter-connected – but fully independent – novels about different branches and generations of a Portuguese Jewish family, in 2010, a short film he based on one of his short stories won the Best Drama award at the New York Downtown Short Film Festival.  It is entitled The Slow Mirror.  Richard also writes reviews for the L.A. Times. When he’s not writing, he enjoys gardening at his weekend house in the north of Portugal.

Related on the Web: