Book: ‘The Mystery of the Sintra Road’ by Eça de Queiroz – Editor’s Note 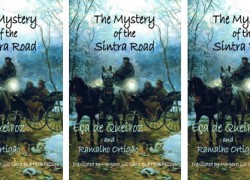 In Eça de Queiroz’s first novel and Portugal’s first mystery-cum-detective novel in its first English translation, two friends are kidnapped by several masked men, who, to judge by their manners and their accent are men of the best society. One of the friends is a doctor, and the masked men say that they need him to assist a noblewoman, who is about to give birth. When they reach the house, they find no such noblewoman, only a dead man. Eça de Queiroz wrote this spoof ‘mystery’ with his friend Ramalho Ortigão, publishing it in the form of a series of anonymous letters in the Diário de Notícias between 24 July and 27 September 1870. Many readers believed the letters to be genuine. As the book progresses, one sees Eça gradually getting into his stride as a novelist, equally at home with humour and with human drama. Recently turned into a major Portuguese feature film it will delight avid Eça fans and lovers of mysteries. It is pleasing to have this jeu d’esprit by one of Europe’s finest writers available in English, in the idiomatically fluent style typical of Margaret Jull Costa, in collaboration with Nick Phillips.

Eça de Queiroz (1845-1900) is considered to be Portugal’s greatest novelist. Dedalus has embarked on a project to make all his major works available in English in new translations by Margaret Jull Costa. Published so far are: The Mandarin, The Relic, The Tragedy of the Street of Flowers, The Crime of Father Amaro, Cousin Bazilio, The Maias, The City and The Mountains, Alves & Co and The Mystery of Sintra Road. Dedalus will publish The Illustrious House of Ramires in 2016.

Ramalho Ortigão (1836 –1915) studied law at Coimbra University, but failed to complete his degree. He then became a teacher of French in a school run by his father, and among his pupils was Eça de Queiroz. From 1862 on, he worked as a journalist and literary critic, contributing to various literary magazines, and in 1870, he and Eça decided to write a spoof romantic novel, purportedly based on a genuine murder case, and which appeared in instalments in the Lisbon daily newspaper Diário de Notícias. The serial proved extremely popular and was subsequently published in book form.

Nick Phillips is a New Zealander with a passion for the Portuguese language and the literature of Portuguese-speaking countries. His collaboration with Margaret Jull Costa on the translation of The Mystery of the Sintra Road mirrors the co-authorship of the original novel.