Book: ‘The Midwife of Torment & Other Stories’ by Paulo da Costa – Editor’s Note 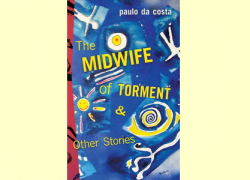 The Midwife of Torment & Other Stories is a collection of sudden fiction that compresses its narrative to deliver a variety of stories that alternate the flavor of a philosophical reflection with the whimsical enchantment of a fable with a twist. These stories also often dwell on the strange–and the horror–found in our mundane lives. Stories that, on occasion, also leap as far as speculative fiction or swirl in a lyrical exploration of prose narratives. Divided into six sections, Midwife explores human and non-human voices through narrative weighing at less than one thousand words, and the vast majority weighing at less than five hundred. Included are a series of black and white lithograph-like original drawings commissioned specifically for this manuscript from the Portuguese visual artist, João Ventura.

Paulo da Costa was born in Angola and raised in Portugal. He is a writer, editor and translator living on the West Coast of Canada. Paulo’s first book of fiction The Scent of a Lie received the 2003 Commonwealth First Book Prize for the Canada-Caribbean Region and the W. O. Mitchell City of Calgary Book Prize. In Portuguese he has published the poetry book, Notas de Rodapé and he is the recipient of the ProVerbo Prize. Several audio chapbooks of fiction and poetry are also available in English and Portuguese. His poetry and fiction have been published in literary magazines around the world and have been translated to Italian, Chinese, Spanish, Serbian, Slovenian and Portuguese.

Related Post: The Green and Purple Skin of the World – Book Review by Norma Lundberg