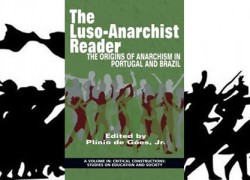 No book has ever presented a selection of writings of anarchists from the Portuguese-speaking world to an English-speaking audience. In The Luso-Anarchist Reader, writings by feminist radicals such as Maria Lacerda de Moura and anarchist communists such as Neno Vasco are made available in English for the first time.

Researchers and activists interested in achieving a more comprehensive understanding of people’s movements could certainly stand to benefit from exposure to these texts. Groups such as the Anarchist Federation of Rio de Janeiro are organizing in both urban and rural Brazil, sometimes working as part of a larger umbrella organization known as Brazilian Anarchist Coordination or CAB coordinating the efforts of various anarchist associations.

Anarchists participated in the massive 2013 protests in Brazil, protests that brought together millions of people to speak out against corruption and for a variety of social causes. Anarchists are active in anti-austerity protests in Portugal against the European troika. Given the visibility of anarchism in the Portuguese-speaking world, Brazil in particular, the need to understand the roots of this anarchist tradition is especially salient.

Anarchism in the Portuguese-speaking world during the early twentieth century brought together immigrants, people of African and indigenous descent, and feminists to forge a solidarity-based alliance for change. The young anarchist activists questioning the status quo today stand on ground seeded by the hard work of their predecessors.

Plínio Tadeu de Góes Jr. is a professor of Portuguese studies at the Saab-Pedroso Center for Portuguese Culture and Research at the University of Massachusetts, Lowell. He is a native of São Paulo, Brazil. He was educated at Harvard University, the University of Michigan and Emory University School of Law. He has worked as a lawyer, community activist and professor and his primary research interest is in religion and religious movements in the Portuguese speaking world and Latin America.