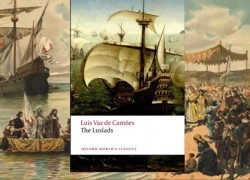 First published in 1572, The Lusiads is one of the greatest epic poems of the Renaissance, immortalizing Portugal’s voyages of discovery with an unrivalled freshness of observation. At the centre of The Lusiads is Vasco da Gama’s pioneer voyage via southern Africa to India in 1497-98. The first European artist to cross the equator, Camões’s narrative reflects the novelty and fascination of that original encounter with Africa, India and the Far East. The poem’s twin symbols are the Cross and the Astrolabe, and its celebration of a turning point in mankind’s knowledge of the world unites the old map of the heavens with the newly discovered terrain on earth. Yet it speaks powerfully, too, of the precariousness of power, and of the rise and decline of nationhood, threatened not only from without by enemies, but from within by loss of integrity and vision. For over 100 years Oxford World’s Classics has made available the broadest spectrum of literature from around the globe. Each affordable volume reflects Oxford’s commitment to scholarship, providing the most accurate text plus a wealth of other valuable features, including expert introductions by leading authorities, voluminous notes to clarify the text, up-to-date bibliographies for further study, and much more.

Luiz Vaz de Camões ( 1524-1580) is the most celebrated Portuguese poet. Born in Lisbon, he travelled to the Red Sea, Persia and Mozambique and spent some years in Goa, India. After his return to Lisbon in 1572, he published The Lusiads recalling the voyages of Portuguese explorer Vasco da Gama. The work became the national epic of Portugal. He died in Lisbon on July 10,1580.

Landeg White was born in South Wales,UK, in 1940, and named for his maternal grandfather. A preacher’s son, he spent his childhood in Cheshire, Glasgow and Hertfordshire, before graduating from Liverpool University. Since 1994, he has lived in Portugal where he teaches at the Universidade Aberta (Open University). He published a prize-winning translation of Camões The Lusiads, and The Collected Lyric Poems of Luis de Camões published by Princeton University Press in 2008.