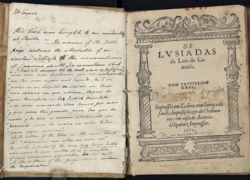 Camões (ca.1524/25-1580) is the national poet of Portugal, with a status in the Lusophone world akin to that of Shakespeare, Dante, Cervantes and Goethe elsewhere. A wonderful lyric poet, and also an occasional dramatist, his masterpiece is Os Lusíadas (The Lusiads), an epic poem on the beginnings of the Portuguese maritime empire, for which the author himself had fought as a common soldier – in North Africa – where he lost an eye in battle, in India, in southern Africa, the Red Sea, India and Macau – where the grotto in which he wrote some of the poem is a tourist attraction. As Dante took Virgil as his guide in the Divine Comedy, so Camões uses the great navigator, Vasco da Gama, as his tutelary spirit, while also aping Virgil’s approach in the Aeneid, fashioning a national epic on the empire’s origins in much the same way as Virgil had done for the Rome of Augustus.

The translation here, dating from 1655, is one of the great translations of the 17th century, made while Sir Richard Fanshawe (1608-1666), a supporter of Charles I and Charles II, was under house arrest during the Cromwellian inter-regnum. Fanshawe also translated two Spanish plays and a number of Spanish sonnets from the period around 1600-1630, with some of the finest being from the baroque master Luís de Góngora. Unlike many of his successors, Fanshawe tries to stay close to the original, occasionally at the cost of having to twist the English to fit the rhyme and metre, the target language having, even in this more flexible era, far fewer resources for rhyme than the Portuguese. The results, nonetheless, are something of a monument, giving voice to a very long and complex poem and making it work, almost, as an English epic. Fanshawe, when not at his desk, was an accomplished diplomat, having served in the Madrid embassy and, after the Restoration, as Ambassador in Lisbon, where he negotiated the marriage of Charles II to Catherine of Braganza.

Luís Vaz de Camões (c. 1524 or 1525 – 20 June 1580) is considered Portugal’s and the Portuguese language’s greatest poet. His mastery has been compared to that of Shakespeare, Homer, Virgil and Dante. He wrote a considerable amount of lyrical poetry and drama but is best remembered for his epic work Os Lusíadas (The Lusiads). His collection of poetry The Parnasum of Luís de Camões was lost during his life. The day of his death, 10 June (old style), is Portugal’s national day. He spent many years serving in the Portuguese military and wrote a considerable part of his epic while assigned to Macau.

Sir Richard Fanshawe, 1st Baronet PC (1608-1666) was an English poet and translator. He was a diplomat and politician who sat in the House of Commons from 1661 to 1666. During the English Civil War he supported the Royalist cause and served King Charles II in battle and in exile, and spent some years under house arrest in England, where he completed his translation of The Lusiads. An accomplished linguist, he was Secretary to the Embassy at the Court of Spain in 1635 and rose to the position of Chargé d’Affaires there in 1638. After the Restoration Fanshawe was elected Member of Parliament for Cambridge University for the Cavalier Parliament and held the seat until his death. From 1662 to 1666, he was Ambassador to Portugal – during which period he negotiated the marriage of King Charles II and Catherine of Braganza – and from 1664 to 1666 was also ambassador to Spain. In 1666 Fanshawe was making preparations to return to England when he died suddenly at his house in Madrid at the age of 58.