Book: ‘The Love Life of an Assistant Animator’ by Katherine Vaz – Editor’s Note 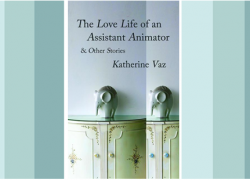 In this long-awaited collection of short fiction by the author of Mariana and Our Lady of the Artichokes, beauty is continually and painfully present in all places–in a Thanksgiving dinner assembled by a widowed DMV worker being stalked by an irate customer; in a middle-aged Hollywood actress who captivates a young studio animator for decades; in the aftermath of an unthinkable tragedy; and in a daughter’s memories of the ethereal, melting ice sculptures made by a woman embroiled in an affair with a wealthy lawyer.

Amid their complex, turbulent relationships in a chronic state of crisis, Katherine Vaz’s wise and restless protagonists carry within them the seeds of a vanished, gracious world of urbane dinner parties and passionate affairs–a humane and cultured civilization whose flawed inhabitants are redeemed by their ability to blend the aesthetic imperative with the power to love.

Katherine Vaz‘s work has appeared in six languages and has received numerous accolades, including the Library of Congress’ Top Thirty International Books of 1998, the Drue Heinz Literature Prize, and the Prairie Schooner Book Award. Her children’s stories have appeared in anthologies by Viking, Penguin, and Simon & Schuster. Once designated a Barnes & Noble Discover Great New Writer and the recipient of fellowships at Harvard University, the Radcliffe Institute for Advanced Study, and the National Endowment for the Arts, as well as the Harman Fellowship, Vaz has lectured internationally about Portuguese and Luso-American literature and is the first Portuguese-American to have her work recorded for the archives of the Library of Congress (Hispanic Division). A native Californian, she lives in New York City and East Hampton with her husband, Christopher Cerf, an editor, composer, television producer, and author.