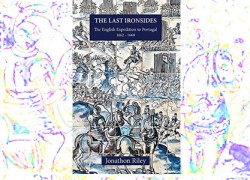 When Charles II returned home he began the search for a dynastic marriage. He fixed upon the Infanta of Portugal, Catherine of Braganza, whose dowry included the possession of Tangier, Bombay and valuable trade concessions.

The Portuguese had been fighting for their independence from Spain for twenty years and needed alliances to tip the scales in their favor. In return for the concessions Charles agreed to send to Portugal a regiment of horse and two of foot, which provided an excuse to ship away the remnants of the Cromwellian armies that had not been disbanded at the Restoration.

The English and French regiments fought with courage and discipline at the series of major battles and sieges that followed, most of which have never been properly described. This is, therefore, the rediscovery of a lost episode in our military history.

It was the English and French soldiers, under Schomberg’s leadership, who proved the decisive factor in winning back Portugal’s independence. But in return for their courage in battle, the English soldiers were rewarded with insults and want of pay. At the conclusion of peace in 1667, only 1,000 out of the 3,500 men who made up the force were left standing. 400 of these received what was effectively a death sentence: they were shipped to Tangier to join the fight against the Moors.

The author’s detailed but lively text is fully supported by a range of illustrations and specially commissioned maps.

About the Author
With a distinguished Military career spanning over 40 years, Jonathon Riley has written 15 books, both Military and Historical. Retiring from the armed forces in 2009, he continues his work as a Military Technical Advisor, external examiner at Cranfield University and visiting lecturer on Military History and Campaign Studies and visiting professor to King’s College London, War Studies. Jonathon Riley has three more books due out this year.
Book Details