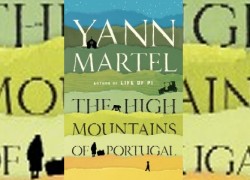 In Lisbon in 1904, a young man named Tomás discovers an old journal. It hints at the existence of an extraordinary artifact that—if he can find it—would redefine history. Traveling in one of Europe’s earliest automobiles, he sets out in search of this strange treasure.

Thirty-five years later, a Portuguese pathologist devoted to the murder mysteries of Agatha Christie finds himself at the center of a mystery of his own and drawn into the consequences of Tomás’s quest.

Fifty years on, a Canadian senator takes refuge in his ancestral village in northern Portugal, grieving the loss of his beloved wife. But he arrives with an unusual companion: a chimpanzee. And there the century-old quest will come to an unexpected conclusion.

The High Mountains of Portugal—part quest, part ghost story, part contemporary fable—offers a haunting exploration of great love and great loss. Filled with tenderness, humor, and endless surprise, it takes the reader on a road trip through Portugal in the last century—and through the human soul.

About the Author
Yann Martel is the author of Life of Pi,

the #1 international bestseller published in more than 50 territories that has sold more than 12 million copies worldwide, won the 2002 Man Booker (among many other prizes), spent more than a year on Canadian and international bestseller lists, and was adapted to the screen in an Oscar-winning film by Ang Lee. It was selected for Esquire’s list of top ten books and the Toronto Star’s ten most important books of the decade. He is also the award-winning author of The Facts Behind the Helsinki Roccamatios (which won the Journey Prize), Self, Beatrice & Virgil, and a book of recommended reading: 101 Letters to a Prime Minister. Born in Spain in 1963, he studied philosophy at Trent University, worked at odd jobs–tree planter, dishwasher, security guard–and travelled widely before turning to writing. He lives in Saskatoon with the writer Alice Kuipers and their four children.