Book: ‘The Global City: On the Streets of Renaissance Lisbon’ – Editor’s Note 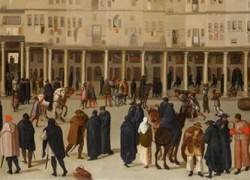 Recently identified by the editors as the Rua Nova dos Mercadores, the principal commercial and financial street in Renaissance Lisbon, two sixteenth-century paintings, acquired by Dante Gabriel Rossetti in 1866, form the starting point for this portrait of a global city in the early modern period.

Focusing on unpublished objects, and incorporating newly discovered documents and inventories that allow novel interpretations of the Rua Nova and the goods for sale on it, these essays offer a compelling and original study of a metropolis whose reach once spanned four continents.

The Rua Nova views painted by an anonymous Flemish artist portray an everyday scene on a recognizable street, with a diverse global population. This thoroughfare was the meeting point of all kinds of people, from rich to poor, slave to knight, indigenous Portuguese to Jews and diasporic black Africans. 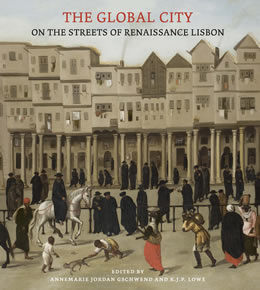 The volume highlights the unique status of Lisbon as an entrepôt for curiosities, luxury goods and wild animals. As the Portuguese trading empire of the fifteenth and sixteenth century expanded sea-routes and networks from West Africa to India and the Far East, non-European cargoes were brought back to Renaissance Lisbon. Many rarities were earmarked for the Portuguese court, but simultaneously exclusive items were readily available for sale on the Rua Nova, the Lisbon equivalent of Bond Street or Fifth Avenue.

Specialized shops offered West African and Ceylonese ivories, raffia and Asian textiles, rock crystals, Ming porcelain, Chinese and Ryukyuan lacquerware, jewelry, precious stones, naturalia and exotic animal byproducts. Lisbon was also a hub of distribution for overseas goods to other courts and cities in Europe. The cross-cultural and artistic influences between Lisbon and Portuguese Africa and Asia at this date will be reassessed.

Lisbon was imagined as the head of empire or caput mundi, while the River Tagus became the aquatic gateway to a globally connected world. Lisbon evolved into a dynamic Atlantic port city, excelling in shipbuilding, cartography and the manufacture of naval instruments. The historian Damião de Góis bragged of the “Tagus reigning over the world”. Lisbon’s fame depended on its river, an aquatic avenue that competed with the Rua Nova, providing a means of interaction, trade and communication along Lisbon’s coastline. Even for the cosmopolitan Góis, who traveled extensively for the Portuguese crown, Lisbon’s chaotic docks were worth describing. Of all the European cities he experienced, only Lisbon and her rival Seville could be “rightfully called Ladies and Queens of the Sea”. Góis contended that they had opened up the early modern world through circumnavigation. 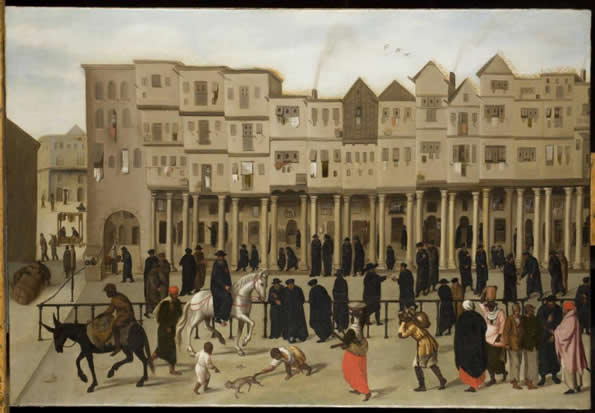 Lisbon was destroyed in a devastating earthquake and tsunami in November 1755. These paintings are the only large-scale vistas of Rua Nova dos Mercadores to have survived, and together with the new objects and archival sources offer a fresh and original insight into Renaissance Lisbon and its material culture.

Annemarie Jordan Gschwend is a Research Scholar with the Centro de História de Além-Mar (CHAM) in Lisbon and Switzerland since 2010. She obtained her Ph.D in 1994 from Brown University, writing a dissertation on the court, household and collection of Catherine of Austria, queen of Portugal (1507-1578). Her areas of specialization include patronage, collecting, menageries and Kunstkammmers at the Renaissance courts in Austria, the Netherlands, Spain and Portugal.  She is the author of numerous publications (articles, exhibition catalogue essays and contributions in books), including her own books: Retrato de Corte em Portugal. O legado de António Moro (1552-1572), (Lisbon, 1994), The Story of Süleyman. Celebrity Elephants and other Exotica in Renaissance Portugal (Zurich, 2012), and a recent biography on the Portuguese queen, Catherine of Austria: Catarina de Áustria. A rainha colecionadora, (Lisbon, 2012). She wrote several entries on Portuguese royal patrons and patronage for the Macmillan Dictionary of Art (London, 1996), and contributed two lengthy essays on the queens Leonor and Catherine of Austria for the Getty Foundation project: The Emperor Charles V and the Inventories of the Imperial Family, directed by Fernando Checa Cremades, published in 3 volumes (Madrid, 2010).