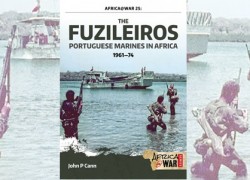 In 1961, Portugal found itself fighting a war to retain its colonial possessions and preserve the remnants of its Empire. It was almost completely unprepared to do so, and this was particularly evident in its ability to project power and to control the vast colonial spaces of Africa. Following the uprisings of March 1961 in the north of Angola, Portugal poured troops into the colony as fast as its creaking logistic system would allow; however, these new arrivals were not competent and did not possess the skills needed to fight a counterinsurgency. While counterinsurgency by its nature requires substantial numbers of light infantry, the force must be trained in the craft of fighting a ‘small war’ to be effective.

The majority of the arriving troops had no such indoctrination and had been readied at an accelerated pace. Even their uniforms were hastily crafted and not ideally suited to fighting in the bush. In reoccupying the north and addressing the enemy threat, Portugal quickly realized that its most effective forces were those with special qualifications and advanced training. Unfortunately there were only very small numbers of such elite forces. The maturing experiences of the Portuguese and their consequent adjustments to fight a counterinsurgency led to the development of specialized, tailored units to close the gaps in skills and knowledge between the insurgents and their forces. This book is about the Fuzileiros or Portuguese marines, a naval force that operated in the riverine littorals of Africa and that was both feared by the enemy and loved by those loyal to Portugal.

The Fuzileiros underwent one of the longest and most physically demanding specialist infantry training regimes in the world, lasting some forty-two weeks. Perhaps only 15 to 35 percent of the inductees eventually passed the course and were awarded the traditional and highly coveted navy blue beret. When deployed to Africa, they underwent further acclimation for weeks until they were able to move through the slime and mud of a riverbank with ease, as their lives depended on it. They became experts at riverine warfare and regularly ranged inland on extended patrols, many of which are recounted here. They were comfortable with the uncomfortable fighting environment, and this ability translated into an unpredictability that the enemy feared. This book is the story of how they came to be formed and organized, the initial teething difficulties, and their unqualified successes.