Book: ‘The Eagle and the Dragon’ – Review 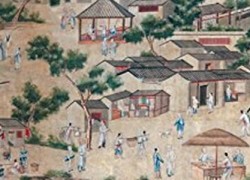 The first Portuguese embassy to China, headed by Tomé Pires, set out from Canton in 1517, reaching the capital Peking in December 1520. Although they carried gifts and letters from King Manuel, the Portuguese did not see the Emperor but were treated as spies, thrown into jail and some executed.

Meanwhile, in November 1519, a Spanish expedition led by Hernán Cortés entered Mexico-Tenochtitlán where they were received with spectacular pomp by the emperor Moctezuma. Months later, in August 1521, the Aztec capital would fall to the Spanish, opening the door to their conquest of much of the American continent.

These first encounters between the Iberians and the two world civilizations of Mexico and China took place therefore around the same time although with completely different outcomes. Serge Gruzinski’s The Eagle and the Dragon, the title referring to the iconic symbols of Mexico and China, is a groundbreaking study that sets to explain the timing and implications of these events.

Gruzinski is one of the most distinguished historians of Hispanic-American cultures. He is a visiting professor at Princeton, as well as research director at the CNRS and director of studies at EHESS, two French prestigious research institutes. Most of his works are promptly translated from French into Spanish and Portuguese, and many have been translated into English too, including this volume.

As historian Peter Burke notes in the foreword, The Eagle and the Dragon is a fine example of what the French call histoire croisée, literally “entangled history”, which aims to explain the past by examining multiple paths and the links between them. Indeed, Gruzinski focuses not so much on providing new historical detail as in elucidating the parallel and intertwined paths of these two events and their combined antecedents and consequences. The result is a feat of scholarship with striking and far reaching interpretations.

World history, argues Gruzinski, does not derive from European expansion – as some narratives might have it – but from a globalization of exchanges. He explores the responses of China and Hispanic America in this light. China was left largely unperturbed and with the capacity to control the flow of exchanges—which persists today – while Hispanic America emerged as a new world of métissages – a simultaneously Western, indigenous American and global blend.

The important message for today is that it was with the Iberian-led globalization of the sixteenth century that Europe, the New World and China became world partners. This globalization was more universal or multilateral than that which followed and—perhaps more in tune with current developments—less Eurocentric as well. China and the Americas are major players in globalization today thanks to that early encounter, their destinies having become inseparable.

The Portuguese embassy to China and the Spanish conquest of Mexico were preceded by similarly simultaneous events, for in 1511 the Portuguese took Malacca and the Spanish Cuba, stepping-stones to greater aims. These and other episodes derived from a common dynamic: not least the headlong competition between Portugal and Spain for the spices and riches of Asia and China; the discovery of America was an accident. 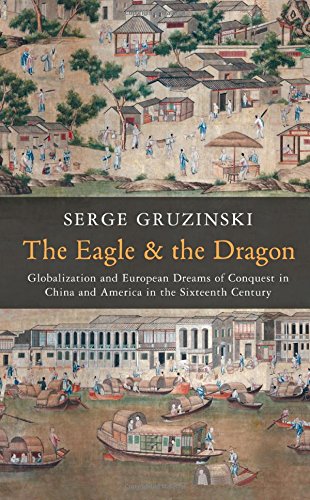 The Eagle and the Dragon revisits the ever-fascinating intellectual ferment of late 15th and early 16th centuries and the information networks established between Lisbon, Seville and Rome, and thence to the rest of Europe. One example is the famous letter by Florentine astronomer Toscanelli, a man privy to Papal audiences with ambassadors, explaining to Lisbon canon Fernão Martins that it was possible to reach the Indies by crossing the Atlantic. Another is the increasing circulation of Marco Polo’s Travels, the early drawn maps inspired by the book, and its new translations: into Portuguese in 1502, and even more important, the translation into Spanish in 1503 by Rodrigo de Santaella, canon of Seville. Santaella notably rejected in his prologue Columbus’s idea that the Antilles were part of Asia and was the first to acknowledge that those Western isles were “Opposite-India”, on the other side of the world.

Santaella, who “was aware of the upheavals caused by the Iberian expeditions”, also advanced another argument of more profound consequences, that of “the admirable diversity of divine creation”, and therefore the opening up of fresh grounds for Christianization.

On the ground, the Portuguese in Asia worked from centuries-old knowledge, making use of “mercantile routes and information networks that had existed in the Far East for centuries”. In 1512, even before the Portuguese had set foot in China, Chinese brocades and books had arrived Lisbon. King Manuel offered one of the books to Pope Leo X, which attracted the admiration of the great humanist Paolo Giovio.

While in Malacca and India in 1512-1515, Tomé Pires, wrote Suma Oriental, the finest compendium of Asia knowledge for more than one hundred years. Spanish expeditions in America, however, were a leap in the void, into the unknown. But after the disappointment of the Antilles, the discovery of the urban civilizations of Mesoamerica meant a decisive step in the first true globalization.

Both the Spanish and Portuguese were filled with admiration at what they found for they understood cities to be centers of civilization. Underpinned by the prestige of the written word, the Chinese books and the Mexican codices were equally considered as marks of sophistication – although the Spanish were also troubled by the human sacrifices in Mexico. In the end, the Spanish took over by force and set out to destroy the Mesoamerican cultures. The Portuguese could not achieve the same outcome; China’s cultural goods, on the contrary, became a constant supply of luxuries to the world.

Gruzinski provides valuable insights into the respective reactions of both Chinese and Mesoamericans. The Chinese displayed a complete lack of interest in the Portuguese or where they originally came from. They also showed a remarkable amnesia of earlier encounters in medieval times with Europeans. The Portuguese are called “Fo-lang-ki”, a name of Arabic and Persian origin referring to the West, just vaguely understanding are coming somewhere in the direction of Sumatra.

This “aversion to foreigners” on the part of the Chinese, being completely impermeable and intractable—as their proverbial ethnocentrism—is complex. For the author, it can be traced to centuries-old conflicts with the peoples of the steppes, which whom the Chinese had refused to trade since the onset of the Ming dynasty in mid-14th century. For the Chinese, a foreigner was a barbarian and a barbarian was a threat.

The limited nature of official curiosity was probably a consequence of the way in which the Chinese court dealt with foreigners and the status it accorded them. The Portuguese had come from a country that was unknown to the Chinese and that did not figure in their list of tributary states. Relations between China and the external world were strictly codified. Even the Suma Oriental of Tomé Pires, written before he had set foot in China, had noted this.

Hence, Gruzinski rejects the expression “clash of civilizations” as a modern construct. Simply, there was a demonstrated inability to engage in fresh thinking on the part of the Chinese administration and an idealized image of relations with the external world. Certainly, at that time there were no notions of equality and reciprocity. “No one wanted or ever contemplated engaging in an ethnography of the other, which would have been totally anachronistic.”

In contrast, says Gruzinski, “the Mesoamerican societies had a pressing need to understand the aggressor…, had retained a place for the other.” (The indigenous Americans called the Iberians by their names, “Castilian”, Castellanos—in contrast, the Iberians named all the peoples they encountered “Indians”.) This openness, among other reasons, would be the cause of their undoing.
Mexico and China entered simultaneously into world consciousness, maps and pictures; shattering for Mexico, unobtrusive for China, both entered into the world stage, creating a global imaginaire 7ndash; a complete cultural and philosophical assemblage.

The Portuguese failure in China drew a dividing line between Asia and America. On one side was a New World which would give its raison d’être to the West, and whose wealth, population and spaces would be ruthlessly exploited; on the other was Imperial China, which would absorb much of the silver extracted from the mines of America by the defeated Indians and African slaves. The fate of the two shores of the Pacific was now linked, as the Iberians had laid down the economic and political bases for a massive decanting of precious metal. The history of the colonization of the New World would have China always in the background, America would be a constant presence in that of modern China.

The Eagle and the Dragon demonstrates Gruzinski’s premise that “the colonization of America and the history of Asia are linked.” Definitely, China benefited from the American colonial set-up: it is because of the constant flow of American silver and the introduction of new crops (sweet potato, peanuts, maize) that from the end of the sixteenth century China experienced unprecedented prosperity, conditions that translated in a demographic boost and also helped to enrich the merchant class.
Gruzinski’s point of view is set in a simple question that deserves serious consideration: it was the Iberians who visited America and China, never the other way around. One would add then another question: if those events are of such crucial importance, the effect over world history spreading over several centuries as to be felt even today, why this is taken for granted?

The Eagle and the Dragon: Globalization and European Dreams of Conquest in China and America in the Sixteenth Century, Serge Gruzinski (Polity Press, December 2014)

© 2015 The Asian Review of Books. Reprinted with permission.

Serge Gruzinski is a historian and French anthropologist born in Tourcoing on November 5, 1949, specializing in the history of Mexico and author of celebrated works on Ethnology and theories of miscegenation. Currently he is the Director of Research at the Centre National de la Recherche Scientifique and Director of Studies at the École des Hautes Études en Sciences Sociales in Paris.
_______________
About the reviewer:

Juan José Morales is a Spanish lawyer and management consultant who writes for the Spanish magazine Compromiso Empresarial. A former President of the Spanish Chamber of Commerce in Hong Kong, he has a Master of International and Public Affairs from Hong Kong University and has also studied international relations at Peking University (Beida).

Other Posts by Juan José Morales