Book: ‘The Day of Atonement: A Novel’ by David Liss – Editor’s Note 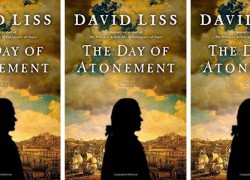 The bestselling author of such novels as A Conspiracy of Paper and The Whiskey Rebels continues his masterly run of “atmospheric” (The Washington Post), “page-turning” (The Baltimore Sun), “tremendously smart” (Newsweek) historical thrillers. In The Day of Atonement, David Liss blends meticulous period detail with crackling adventure in the tale of one man’s quest for justice—and retribution.
Sebastião Raposa is only thirteen when his parents are unjustly imprisoned, never to be seen again, and he is forced to flee Portugal lest he too fall victim to the Inquisition. But ten years in exile only serve to whet his appetite for vengeance. Returning at last to Lisbon, in the guise of English businessman Sebastian Foxx, he is no longer a frightened boy but a dangerous man tormented by violent impulses. Haunted by the specter of all he has lost—including his exquisite first love—Foxx is determined to right old wrongs by punishing an unforgivable enemy with unrelenting fury.
Well-schooled by his benefactor, the notorious bounty hunter Benjamin Weaver, in the use of wits, fists, and a variety of weapons, Foxx stalks the ruthless Inquisitor priest Pedro Azinheiro. But in a city ruled by terror and treachery, where money and information can buy power and trump any law, no enemy should be underestimated and no ally can be trusted. Having risked everything, and once again under the watchful eye of the Inquisition, Foxx finds his plans unraveling as he becomes drawn into the struggles of old friends—and new enemies—none of whom, like Lisbon itself, are what they seem.
Compelled to play a game of deception and greed, Sebastian Foxx will find himself befriended, betrayed, tempted by desire, and tormented by personal turmoil. And when a twist of fate turns his carefully laid plans to chaos, he will be forced to choose between surrendering to bloodlust or serving the cause of mercy.

“In his latest historical thriller, Liss portrays eighteenth-century Lisbon in vivid detail, leading up to the great earthquake of 1755. The history is well researched and furnishes an excellent portrait of Portugal under the ever-looming shadow of the Inquisition. A compelling story of obsession and revenge, the novel is also ultimately a tale of redemption. Liss fans and aficionados of intelligent, well-written historical fiction will be eager for this title.”—Library Journal (starred review)

David Liss is the author six novels, most recently The Devil’s Company. He has five previous bestselling

novels: A Conspiracy of Paper, winner of the 2000 Edgar Award for Best First Novel, The Coffee Trader, A Spectacle of Corruption, The Ethical Assassin and The Whiskey Rebels. In 2008, at the United Nations Convention against Corruption in Bali, Indonesia, he was named an Artist for Integrity by the UN Office on Drugs and Crime. No one is really sure why he should receive this honor or what it means, but it very possibly makes him the Bono of historical fiction. David Liss’s novels have been translated into more than two dozen languages. He lives in San Antonio with his wife and children.