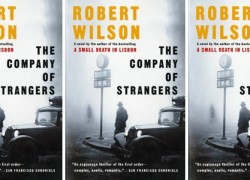 1944: Andrea Aspinall, mathematician turned spy, disappears under a new identity into the torrid summer streets of Lisbon that see the with spies and informers. The Germans have made advances in atomic and rocket technology and the Allies are determined that the ultimate secret weapon will not become a reality in Nazi hands. Karl Voss, already experienced in the illusions of intrigue, arrives in Lisbon as military attaché to the German Legation. There he begins his subversive work against the Nazi regime to rescue his country from annihilation. In the lethal tranquility of a corrupted paradise Andrea and Karl meet and attempt to find love. Tragically, a night of violence leaves Andrea the keeper of a secret that triggers a lifelong addiction to the clandestine world. From Portugal to England and finally Cold War Berlin, she gradually discovers that the deepest secrets aren’t held by governments, but by those closest to you. In The Company of Strangers, award-winning novelist Robert Wilson takes the ironies of Cold War espionage to a new and more poignantly human level, as he shows that when the head and the heart come into confrontation, the heart will always win.

Robert Wilson is the author of numerous novels, including The Company of Strangers and A Small Death in Lisbon, which won the Gold Dagger Award as Best Crime Novel of the Year from Britain’s Crime Writers’ Association. A graduate of Oxford University, he has worked in shipping, advertising, and trading in Africa, and has lived in Greece, Portugal, and West Africa.