Book: ‘The City of Ulysses’ by Teolinda Gersão – Editor’s Note 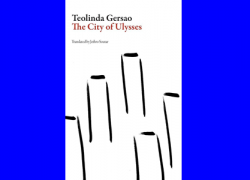 A man and a woman meet in Lisbon and fall in love. City of Ulysses is their story, and the city’s love story besides. It is a story that leads readers down multiple paths, through myth and history, reality and fantasy, literature and the visual arts, the past and the present, male and female relations, the crisis of civilization and the need to re-imagine the world.

Teolinda Gersão was born in Coimbra, Portugal, and has lived in Germany, Brazil, and Mozambique. She studied German, English and Romance Languages and Literatures at the universities of Coimbra, Tuebingen, and Berlin. She was a lecturer in Portuguese at the Technical University of Berlin, a member of the teaching staff of the Lisbon Arts Faculty and a professor at the New University of Lisbon, where she taught German Literature and Comparative Literature until 1995. Since then has devoted herself entirely to writing. Her work has received some of the most important awards for novels and short stories in Portugal and has been translated in several languages. She was a resident writer at Berkeley University in February and March 2004. Teolinda Gersão is the winner of the 2017 literary award Camilo Castelo Branco, for short stories.

Jethro Soutar is a translator of Portuguese and Spanish. His translation of By Night The Mountain Burns by Juan Tomás Ávila Laurel was shortlisted for the 2015 Independent Foreign Fiction Prize. He recently founded Ragpicker Press and co-edited its debut title, The Football Crónicas, a collection of Latin American narrative non-fiction.
For The Football Crónicas.Jethro translated ‘The Goal in the Back of Beyond’ by Mario Murillo, ‘A Grenade for River Plate’ by Juan Pablo Meneses, ‘Lucha Libre versus Football’ by Wilmer Urrelo Zárate, ‘The Mexican Pelé’ by Agustín del Moral Tejeda, ‘Football and Plague’ by Diego Trelles Paz, and ‘The Big Family’ by Vinicius Jatobá.