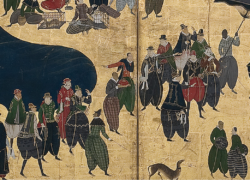 The first known appearance of organized Christianity in Japan was the arrival of the Portuguese Catholics in 1549. Spanish missionary Francis Xavier arrived in Japan with three Japanese Catholic converts intending to start a church in Japan. The local Japanese people initially assumed that the foreigners were from India and that Christianity was a new “Indian faith”.

These mistaken impressions were due to already existing ties between the Portuguese and India; the Indian city of Goa was a central base for Portuguese India at the time, and a significant portion of the crew on board their ships were Indian Christians. Later on, the Roman Catholic missionary activities were exclusively performed by Jesuits and mendicant orders, such as the Franciscans and Dominicans.

Francisco Xavier (a Catholic Saint), Cosme de Torres (a Jesuit priest), and Juan Fernández were the first who arrived in Kagoshima with hopes to bring Christianity to Japan. Xavier and the Jesuit order were held in good esteem and his efforts seemed to have been rewarded with a thriving community of converts. At baptism, these converts were given Portuguese “Christian names” and encouraged to adopt Western culture. This practice contributed to suspicions that the converts were in reality foreign agents working to subvert social order. Under Oda Nobunaga, the Jesuits enjoyed the favor of his regency, but the situation began to change once Toyotomi Hideyoshi’s suspicions were aroused against Christianity.

Persecution under the Shogunate: Martyrs of Japan and Kakure Kirishitan: Under Hideyoshi and the succeeding Tokugawa shogunate, Catholic Christianity was repressed, and adherents were persecuted. During Toyotomi rule especially, foreign missionaries were killed in Japan, some by (Japanese-style) crucifixion; most famously, the twenty-six martyrs of Japan were tortured and crucified on crosses outside Nagasaki to discourage Christianity in 1597.

Charles R. Boxer (1904-2000), the most distinguished scholar of seventeenth-century Portuguese and Dutch colonial history of his generation, was a Fellow of the British Academy. He had been an army officer and in 1930 was seconded to the Far East as a language officer to specialize in Japanese. Boxer combined his duties with scholarly study and survived imprisonment by the Japanese during World War II. After the War, he held the Camões Chair of Portuguese at King’s College London. Boxer’s most influential book was Race Relations in the Portuguese Colonial Empire 1415–1825.