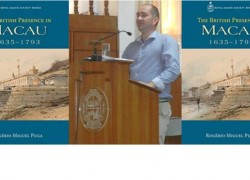 One of the most famous incidents—and there were indeed many—caused by British traders in the South China sea was that of the ship Lady Hughes in 1784. When entering Whampoa, a cannon’s salute was fired, an old European habit that greatly annoyed the Chinese. That particular cannon, unfortunately, was loaded with live ammunition and hit a small boat, killing two Chinese fishermen and injuring one.

The Mandarin in Canton demanded that the authorities in Macau — which in Chinese eyes were always responsible for the conduct of all Western barbarians reaching Canton — hand over the men who fired the cannon for torture and beheading. The Portuguese responded that the culprits had gone missing and that, anyway, it had been only an incident.

The Chinese then demanded that any British national, it didn’t matter whom, be turned over. Trade was suspended, food supplies were cut out and finally the British had to deliver their oldest sailor for execution.

Rogério Miguel Puga’s new book The British Presence in Macau 1635-1793, which draws on Portuguese as well as British sources, discusses the usually fraught relationship between these two colonial powers as they wrestled for influence on the South China coast.

Starting with the arrival of the first English vessel in Macau—the London under the command of Matthew Willis in 1635—relations between the Portuguese and the British were stormy and painful, marked by reciprocal mistrust. The Macanese were in need of protection against Dutch and had to accommodate in one way or another the heretic British traders.

After the collapse of the lucrative trade with Japan circa 1640 due to Dutch interference, Macau had to rely on trade procured by British merchants and put up with their troublesome crews. The standard of education among sailors was not high; the words of Samuel Johnson come to mind: “No man would be a sailor who has contrivance enough to get himself into a jail; for being in a ship is being in jail, with the chance of being drowned… A man in jail has more room, better food and commonly better company.”

Puga reminds us that the British were late-comers in China and had to rely on Macau as the only stepping-stone then available to them, even if they never fully accepted Portugal’s sovereignty over it and resented the fact that the Portuguese were constantly at the mercy of the Chinese Mandarinate of Canton. Since the very beginning, the British schemed and planned to occupy Macau manu militari, perhaps not understanding that China—sensing that they were much more dangerous—would not have granted them the same concessions. British designs on Macau ended only in 1841 with the occupation of Hong Kong.

The Dutch tried to capture Macau in 1622 with fourteen ships which were joined by two British vessels, the Palsgrave and the Bull. But by the next year, this Anglo-Dutch cooperation soured after the “Amboina Massacre”: the Dutch in Ambon (present day Maluku) tortured and beheaded ten British in the service of East India Company on accusations of treason, along with a Portuguese and nine Japanese samurai accomplices. When this news reached England, it caused a great uproar against the Dutch.

Starting from about 1700, the British started negotiating directly with the Chinese authorities using Macau as a depot and temporary residence when trade was closed in Canton. The Portuguese were dismayed by the turn of events but by then they could not do without their guests, even if their passion for prostitutes and for luxury—fuelled by the sale of opium they were cultivating in India—was causing hyperinflation: the price of prime property was soaring, even the British had to use local residents to act as buyers.

The Portuguese never failed to keep their Chinese counterparts well-informed about the British, ensuring that they were fully aware that the British were very “deceitful and hypocritical”. The British Presence in Macau ends with notes on the failed Lord Macartney’s embassy to China of 1792-1794, revealing that the Portuguese and the few Jesuits still present in Beijing at the Qianlong court made sure that it would end as such.

But the British won in the end, of course, even linguistically. Pidgin English soon became the lingua franca of South China replacing Portuguese. Words like savvy or expressions like no money no talk or long time no see travelled back to Europe and America and are still with us.

This book by Rogério Miguel Puga is an essential tool for the study of development of the relations between Great Britain and China before the Opium Wars. It gives a new and independent perspective, not parroting the standard views offered by British historians.

Source: This review was first published in The Asian Review of Books. Reprinted with permission.

(*) Angelo Paratico is an Italian journalist living in Hong Kong. He is author of several books in Italian and English, the most recent of which Nero: An Exemplary Life; his website is angeloparatico.com